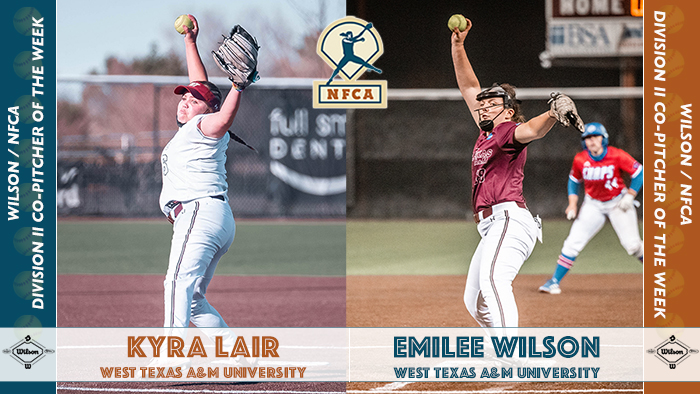 LOUISVILLE, Ky. – West Texas A&M’s perfect duo of Kyra Lair and Emilee Wilson was named Wilson / NFCA Co-Pitcher of the Week, while Augustana’s Kendall Cornick earned Louisville Slugger / NFCA Player of the Week honors. They were recognized for their outstanding performances in contests played during the week of April 26-May 2.

In a rare occurrence, Lair and Wilson twirled back-to-back perfect games against Eastern New Mexico in a doubleheader sweep. The duo combined to sit down all 30 batters over the course of 10 innings. Lair fanned nine and Lee struck out three, and allowed just two balls out of the infield as the ninth-ranked Lady Buffs improved to 32-10 on the season.

Cornick batted .750 with a pair of home runs, nine runs scored and five RBI keying the top-ranked Vikings to sweeps of Bemidji State and Minnesota Crookston. Registering four multi-hit and multi-run contests, the senior outfielder slugged 1.250, reached base at a .786 clip and was 5-for-5 stealing bases. Cornick homered in both victories over Minnesota Crookston, driving in three runs in game two. The Mason, Iowa added three runs scored and swiped two bases in game two against Bemidji State.