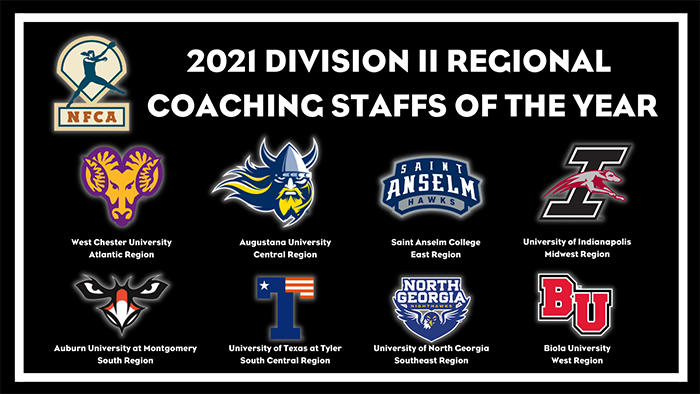 LOUISVILLE, Ky. – Eight NCAA Division II programs were voted by their peers as the NFCA Regional Coaching Staffs of the Year, the Association announced on Friday.

Regional (respective region only) and National Coaching Staffs of the Year are voted on by member head coaches.

Third straight regional title and trip to the National Championship … Ranked No. 3 in the Atlantic Region and No. 7 at the NCAA Championship … Swept through regional competition, posting four straight wins … Captured first PSAC tournament title since 2017 and second overall with a two-game sweep of Seton Hill in the finals … Head into championship on seven-game win streak and have won 16 of their last 19.

Held No. 1 spot in NFCA Coaches Poll last six weeks … Ranked No. 1 in the Central Region and at national championship … Second straight regional title and berth into the final eight … Swept their way through regional competition, knocking off No. 17 Minnesota State twice, and No. 19 Southern Arkansas … Melsted was tabbed NSIC Coach of the Year … NSIC regular-season champions and tournament runner-up … Have won 20 of 22 entering national championship tournament.

Nationally ranked all season and entered the postseason at No. 18 in NFCA Poll and No. 2 at NCAA Championship … Ranked No. 2 in the East Region … Making second national championship appearance in the last three seasons … Captured the East Region title after defeating Georgian Court in the if-necessary game … Posted a 5-0 mark to claim their second NE-10 tournament title after winning the Northeast Division regular-season championship.

GLVC regular-season and tournament champions … Midwest Regional finalist, forcing the if-necessary game against Grand Valley State… Ranked second in Midwest Region … Nationally-ranked all season, holding the No. 7 spot in the final regular-season poll and reached as high as No. 5 … Started the season … Owned a 25-game winning streak earlier this season, longest in Division II in 2021 … This marks the fourth Regional Coaching Staff of the Year honor for the Greyhounds under the direction of Frost, who was the GLVC Coach of the Year.

It was a season of firsts for AUM as a Division II program … The Warhawks captured their first Gulf South Conference regular-season (tie) and tournament titles … Swept through GSC Tournament with a 4-0 record, outscoring their opponents, 27-5 … No. 1 ranked team in the South Region … Rose to No. 3 in the NFCA Coaches Poll at the end of the regular season … This marks the second Regional Coaching Staff of the Year honor, earning NAIA recognition in 2015.

In first full season of NCAA Division II competition*, the Patriots won its first Lone Star Conference regular-season title … LSC title was the first women’s team championship for UT Tyler … Rose to as high as No. 2 in NFCA Coaches Poll and have been in the top 10 since week one of the 2020 season … Reed, the LSC Coach of the Year, and his UT Tyler coaching staff have now earned six (five at Division III) regional Coaching Staff of the Year honors.

Punched ticket to 2021 national championships by winning two games on the final day of the Southeast Regional … The NightHawks rebounded from an earlier loss to Lincoln Memorial with 4-0 and 3-1 victories sending them to their sixth National Championship tournament … No. 4 national seed … No. 1 seed in Southeast and No. 2 in NFCA Coaches Poll … Captured seventh straight Peach Belt regular-season and tournament titles … This is the sixth Regional Coaching Staff of the Year recognition for Davenport and his staffs.

The Eagles earned a trip to their first-ever NCAA DII National Championship tournament as the No. 5 national seed … Additionally, Biola entered its first NCAA Regional as the West’s No. 2 seed … Posted a 3-1 mark during regionals, winning the if-necessary game over host and No. 1 seed Concordia Irvine … Playing in a three-team PacWest Southern California pod during the regular season, Biola knocked off nationally-ranked Concordia Irvine seven times … Udria was named PacWest Coach of the Year.