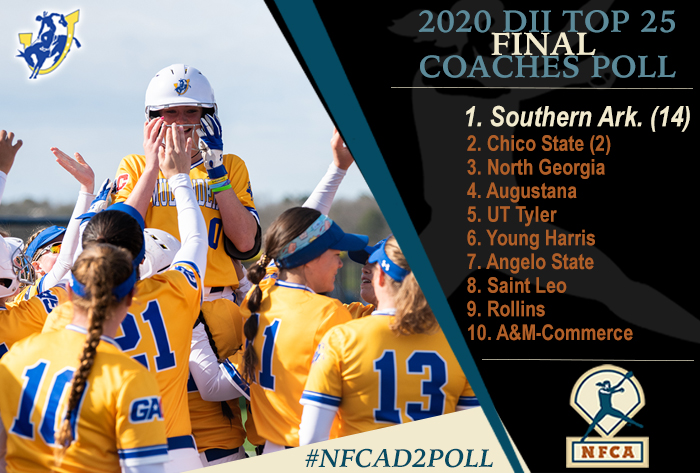 LOUISVILLE, Ky. – Southern Arkansas ended the season on a 16-game winning streak and was voted No. 1 in the final 2020 NFCA Division II Top 25 Coaches Poll. The 2020 season was shortened when the NCAA canceled all spring championships on March 12 due to the COVID-19 pandemic.

With no contests being played after the 12th, the only movement in the poll was No. 23 Charleston and No. 24 UC San Diego switching spots.

The idle Muleriders (22-2) captured 14 of a possible 16 first-place votes and 398 points to finish the season atop the poll for the first time in program history. They opened Great American Conference (GAC) play 12-0, also a program best. SAU topped the NCAA Division II offensive charts with 35 home runs, .621 slugging percentage and 9.54 runs scored per game.

No. 4 Augustana posted a 6-0 week in Florida and ended the year on a seven-game winning streak. The Vikings (16-3) came into 2020 preseason No. 1 and was ranked in the top spot on one other occasion.

No. 5 UT-Tyler made a splash in its first year of Division II competition, running out to a 16-0 start and finishing 17-3. The Patriots reached the No. 2 ranking on March 4. No. 6 Young Harris earned its first No. 1 ranking in program history on Feb. 19 and held it for two weeks. The Mountain Lions (19-3) also swept a doubleheader from then-No. 25 UAH in Huntsville, the final top-25 matchup of 2020.

The Lone Star Conference led the way with six nationally-ranked programs, three in the top-10 (UT Tyler, No. 7 Angelo State, No. 10 Texas A&M University-Commerce). The Sunshine State Conference (Saint Leo, No. 9 Rollins) and Peach Belt (North Georgia, Young Harris) each had two programs in the top-10. A total of 36 programs earned rankings over six polls.

The 2020 NFCA Division II Top 25 Poll is voted on by 16 NCAA Division II head coaches with two representing each of the eight NCAA regions.

The 2020 NFCA Division II Top 25 Coaches Poll is voted on by 16 NCAA Division II head coaches with two representing each of the NCAA’s eight regions. Records reflect games played through March 8 with first-place votes in parentheses.

*The NCAA canceled all spring championships on March 12 due to the COVID-19 pandemic.