Augustana returns to No. 1 in NFCA DII Top 25 Coaches Poll 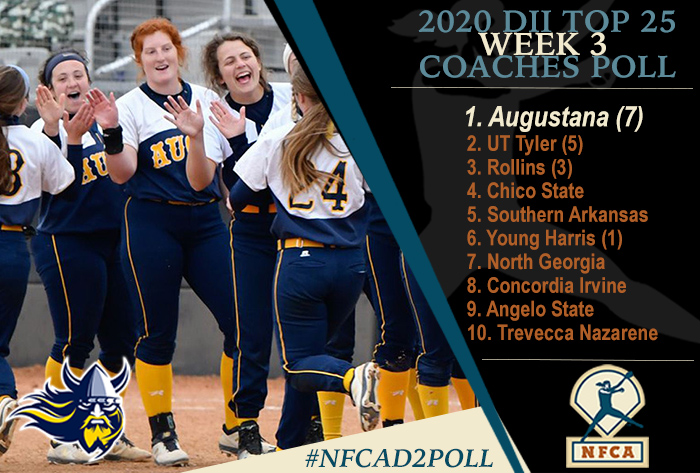 LOUISVILLE, Ky. – Augustana returned to No. 1 in the latest NFCA Division II Top 25 Coaches Poll, announced by the Association on Wednesday. In a very close vote that saw four teams receive first-place votes, the Vikings (8-2) earned seven of those votes and 387 points.

With Young Harris falling out of the top spot, the next five programs – Augustana, UT Tyler, Rollins, Chico State and Southern Arkansas – each moved up one spot in the poll, while the Mountain Lions (13-3) dropped to No. 6.

The idle Vikings edged out UT Tyler (385) by two points. The second-ranked Patriots (16-0), who captured five first-place nods, continued their hot start with six more wins. After a mid-week sweep of Our Lady of the Lake, UT Tyler swept then-No. 16 Texas A&M University-Commerce (2-1, 3-2) in its first-ever Lone Star Conference (LSC) twinbill and then proceeded to sweep Texas Woman’s (4-2, 9-1).

No. 4 Chico State and No. 5 Southern Arkansas each swept their respective four-game conference series. The Wildcats (16-1) extended their winning streak to seven games after shutting out Cal State East Bay. Chico State’s pitching staff twirled two no-hitters, did not allow a run over 23 innings and held the Pioneers to an .068 batting average (five hits).

The Muleriders (18-2) went on the road and outscored Northwestern Oklahoma State, 57-5. Extending its winning streak to 12 contests, Southern Arkansas’ offense exploded, scoring 20 and 21 runs in games one and four. It marked the second and third time this season, they have reached the 20-run plateau.

The 2020 NFCA Division II Top 25 Poll is voted on by 16 NCAA Division II head coaches with two representing each of the eight NCAA regions. Records reflect games played through March 1.

The 2020 NFCA Division II Top 25 Coaches Poll is voted on by 16 NCAA Division II head coaches with two representing each of the NCAA’s eight regions. Records reflect games played through March 1 with first-place votes in parentheses.