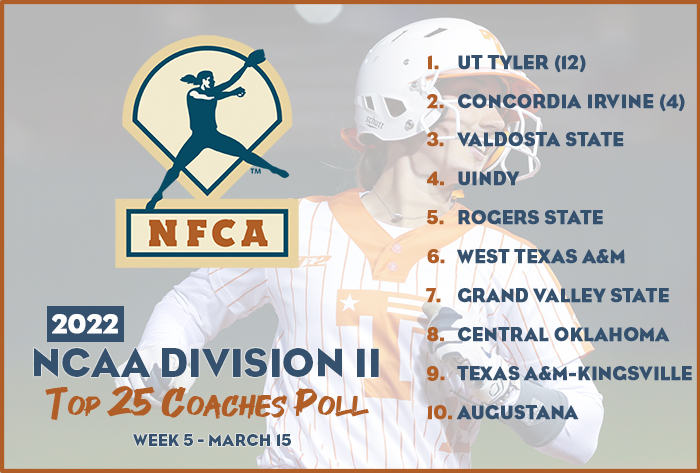 LOUISVILLE, Ky. – UT Tyler strengthened its hold on the top spot in this week’s 2022 Division II Top 25 Coaches Poll. The Patriots (21-1) received 12 first-place votes and 396 points, extending its advantage over No. 2 Concordia Irvine (24-0), who received four first-place nods and 388 points.

The next four spots – No. 3 Valdosta State (idle last week), No. 4 Indianapolis, No. 5 Rogers State, No. 6 West Texas A&M and No. 7 Grand Valley State - did not change. The only shift in the top 10 witnessed Central Oklahoma and Texas A&M-Kingsville shift into No. 8 and No. 9, while Augustana dipped to No. 10.

Amongst the top 10, the fourth-ranked Greyhounds (15-1), fifth-ranked Hillcats (20-2) and eighth-ranked Bronchos (21-3) were undefeated in respective league play. The sixth-ranked Lady Buffs (13-6) split at then-No. 15 Lubbock in an LSC twinbill and the ninth-ranked Javelinas (22-3) posted a 3-1 mark in LSC competition.

Off to a 23-3 start, Cal State San Marcos jumped into the poll at No. 25, making its first national ranking appearance as a NCAA Division II program. Fellow California Collegiate Athletic Association program Cal State Monterey Bay fell out of the rankings following a 1-3 outing against Sonoma State.

The 2022 NFCA Division II Top 25 Poll is voted on by 16 NCAA Division II head coaches with two representing each of the eight NCAA regions. Records reflect games played through March 13.