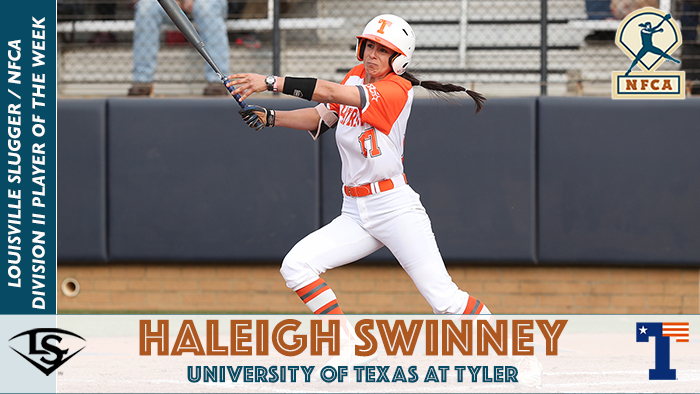 LOUISVILLE, Ky. –University of Texas at Tyler’s Haleigh Swinney was named the Louisville Slugger / NFCA Player of the Week for her outstanding performance in contests played during the week of Feb. 8-14.

Swinney, a senior from Crosby, Texas, keyed the fourth-ranked Patriots to a pair of wins over Montevallo in their opening contests of the 2021 season. She was nearly perfect at the plate, going 7-for-8 (.875) with three doubles and triple, six RBI and five runs scored. Swinney posted a 1.500 slugging percentage and reached base safely in eight-of-nine plate appearances for an .889 on-base percentage.

In game one, Swinney was 4-for-4 at the dish with five RBI and two runs scored. She knocked in three runs with a bases loaded triple in the second inning and also recorded a pair of runs-scoring doubles. Swinney scored three times in game two, including the go-ahead run in the second inning.