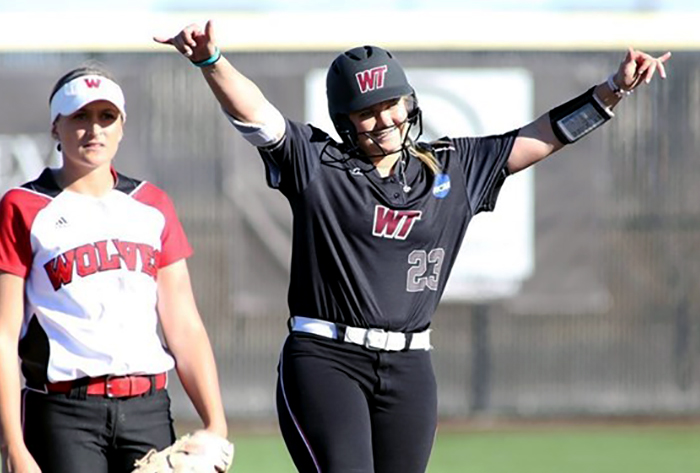 LOUISVILLE, Ky. – West Texas A&M became one of two Division II teams to reach the 50-win plateau as it remained No. 1 in this week’s NFCA Division II Top 25 Coaches Poll, announced by the Association on Wednesday morning. The top six teams remained the same as the bottom of the top-10 saw some shifting.

Receiving 15 first-place votes and 399 points, the Lady Buffs (50-2), who already clinched the Lone Star Conference (LSC) regular season title last week, cleaned up with five more wins in the final week of their regular season. On the road, WT blanked Lubbock Christian (7-0) and swept a high-scoring tightly contested league series from Texas Woman’s (9-6 in 8, 13-7, 11-5 in 8, 8-7). The four wins pushed their total to 30 in LSC play, a new league mark. The Lady Buffs are seeking their third straight LSC tournament crown this weekend as hosts of the tournament.

No. 2 Indianapolis, No. 4 North Alabama, No. 6 Missouri-St. Louis, No. 7 California (Pa.) and No. 9 St. Mary’s all closed out their regular seasons with unblemished weeks in conference play. The Greyhounds (46-3), Lions (46-5), Vulcans (32-2) and Rattlers (40-9) all clinched the top seeds in their respective conference tournaments. The Tritons (48-5) will be the No. 2 seed in the Great Lakes Valley tournament.

No. 5 North Georgia also went undefeated as it reached the 50-win mark, claiming its third straight Peach Belt tournament title.  After sweeping Montevallo (8-0, 6-0) their final regular season twin bill, the NightHawks cruised to the PBC title with wins over Francis Marion (8-0), UNC Pembroke (6-3) and USC Aiken (8-0) and received the league’s automatic bid to the NCAA Tournament.

Regular season California Collegiate Athletic Association (CCAA) champions, No. 3 Humboldt State had its final league series wiped out by weather. The Jacks (45-3-1) will host the 2016 CCAA this weekend.

No. 7 California and No. 9 St. Mary’s moved up in the poll. The Vulcans jumped two spots from No. 9 after posting four wins and clinching the Pennsylvania Schools Athletic Association (PSAC) West Division crown with victories over Gannon (4-0, 7-2) and Seton Hill (5-4 in 8, 12-1).

Arkansas Tech remained in the eight spot, while No. 10 Saint Leo fell for the second straight week. The Golden Suns went 3-1 in their final Great American Conference series versus Northwestern Oklahoma (8-0, 5-0, 2-3, 5-1) to give them a school-record 44 wins and the GAC regular season crown heading into the league tournament this weekend.

Valdosta State makes its return to the poll at No. 21 after falling out in week four. The Blazers (38-10-2) won 12 of their last 13 contests to earn No. 2 seed in the Gulf South Conference tournament hosted by No. 4 North Alabama.

Dropped Out: No. 21 West Florida, No. 25 (tie) Northwest Missouri State

New to Poll: No. 21 Valdosta State