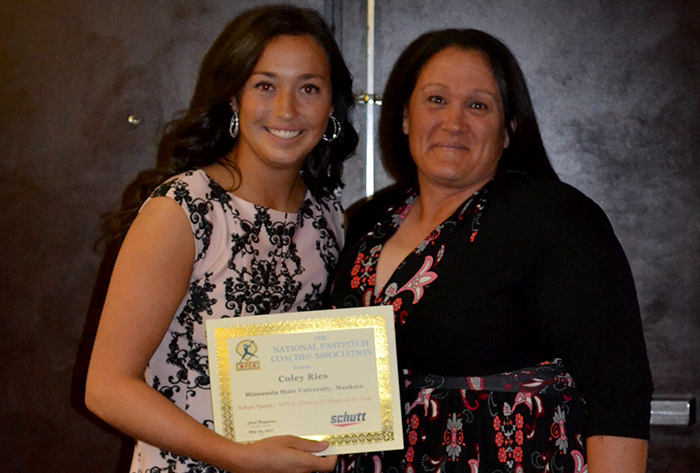 LOUISVILLE, Ky. – Senior Coley Ries of Minnesota State has been voted the 2017 Schutt Sports/NFCA Division II National Player of the Year. She was presented the award on Wednesday evening at the NCAA Division II Championship banquet in Roanoke, Va.

Ries is putting forth one of the more dominating pitching performances in NCAA Division II this season. The right-handed hurler has amassed a NCAA-best 426 strikeouts, 16 shutouts and 36 wins (36-3). Along with allowing the fewest hits per seven innings amongst DII pitchers (3.42), Ries is holding opponents to a .146 batting average. Additionally, the Eagle Lake, Minn. native’s 11.5 strikeouts per seven innings ranks second in the NCAA and her 1.02 ERA is third.

A unanimous NFCA First-Team All-American, Ries tossed back-to-back perfect games in April. Her accomplishment was highlighted in Sports Illustrated Faces in the Crowd feature. She enters the NCAA Division II Championships as the program’s all-time leader with 116 wins and 1,431 strikeouts.

The award was created in 2015 to honor the outstanding athletic achievement among softball student-athletes throughout Division II. Ries is the third recipient of the award, joining inaugural winner Courtney Poole of North Georgia and Wayne State University’s Lyndsay Butler to receive this prestigious accolade.