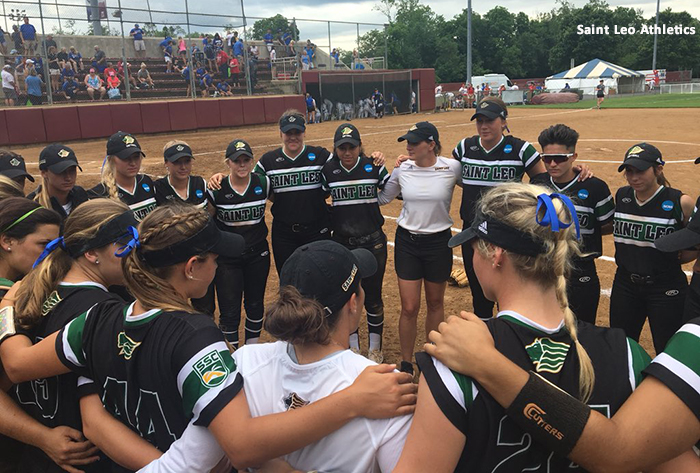 SALEM, Va. -- In an effort to beat the impending bad weather, it was an early wakeup call on day three of the NCAA Division II Championships at the Moyer Sports Complex as the first two elimination games’ first pitches were thrown at 8:30 a.m.

No. 6 Saint Leo and No. 7 Southern Arkansas moved on to the national semifinals with victories over No. 1 North Georgia and No. 4 Angelo State.

Southern Arkansas stayed alive and beat the rain with a 11-5 win over Saint Anselm to force a winner-take-all semifinal tomorrow.

The contest between Saint Leo and Southern Indiana will resume at 8:30 a.m. tomorrow. The Lions lead the Screaming Eagles, 4-2, in the top of the sixth.

Victoria Taylor stayed undefeated on the season with a two-hit complete-game shutout and Southern Arkansas hit two home runs in a 3-0 elimination win over Angelo State.

Taylor (32-0) struck out nine and walked two to record her ninth shutout of the season.

The Lady Muleriders (59-10) scored single runs in the second, fifth and sixth innings. The solo long balls came in the second and sixth off the bats of Rachel Miller and Monica Islava. Jill Roye drove in a run in the fifth with a bloop single to center.

Megan Godoyo, Roye and Miller each had two hits for Southern Arkansas. Madison Greenwell and Taegan Kirk recorded singles for the Rambelles (53-8).

Saint Leo scored three runs in the fourth and held off a seventh-inning rally to defeat No. 1 North Georgia, 3-2, and advance to NCAA DII semifinals.

After an error opened the scoring, Sarah Pauscher smacked a pinch hit, two-out, two-run single to left, putting the Lions (39-17) up 3-0.

The NightHawks (62-4) mounted a comeback in the bottom of the seventh. A sac fly by Marley Stowers with the bases loaded put UNG on the board. Pinch hitter Kristen Adkins singled back up the middle to cut the advantage to 3-2. Starter Auria Mounts returned and recorded the final two outs to secure the win.

Mounts (17-9) started and went five-plus, leaving after a leadoff walk in the sixth. She would come in and unofficially save her own win. She finished with 5.2 shutout innings, allowing two hits, striking out two and walking one.