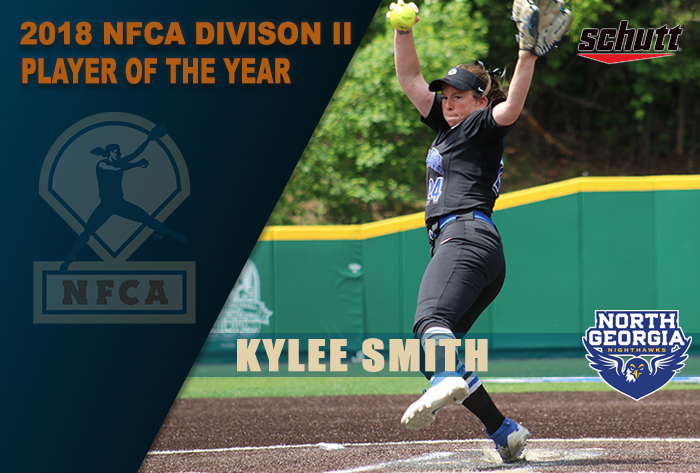 LOUISVILLE, Ky. – Sophomore Kylee Smith of the University of North Georgia has been voted the 2018 Schutt Sports/NFCA Division II National Player of the Year. She becomes the second NightHawk to earn this distinction, joining inaugural winner Courtney Poole (2015).

Smith, who hails from Suwanee, Georgia, finished 2018 as the NCAA Division II leader in three categories, topping the charts with 36 victories, 338 strikeouts and a microscopic 0.59 ERA. In playing a pivotal role during UNG’s run to the NCAA Division II Championships, Smith allowed the second fewest hits per seven innings (3.17), was third in strikeouts per seven innings (10.0) and fifth in strikeout-to-walk ratio (7.51).

A two-time NFCA First-Team All-American, Smith held her opponents to a .137 batting average and walked just 45 batters in 236.1 innings of work. She was named Peach Belt Pitcher of the Year and was key to the NightHawks collecting their fifth straight PBC regular season and tournament titles, both conference records. Additionally, Smith was the selected the D2CCA Ron Lenz Pitcher of the Year and named to the D2CCA First Team.

The award was created in 2015 to honor the outstanding athletic achievement among softball student-athletes throughout Division II. Smith is the third recipient of the award, joining Poole, Wayne State University’s Lyndsay Butler and Minnesota State’s Coley Ries to receive this prestigious accolade.