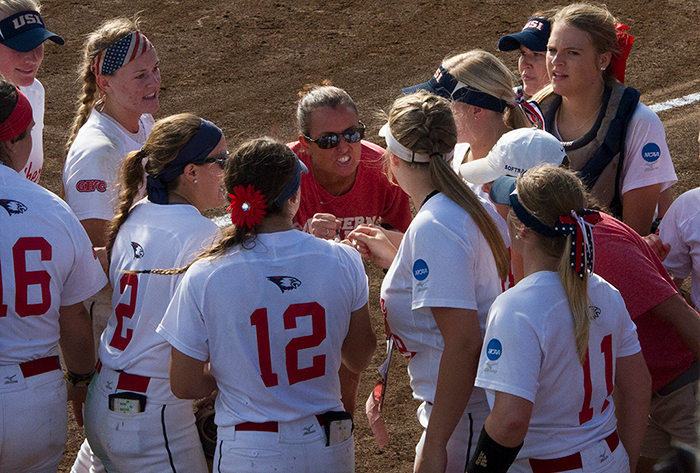 SALEM, Va. – Southern Indiana and Saint Anselm punched their tickets to the NCAA Division II Championship series with victories on Sunday at the Moyer Sports Complex. The matchup will guarantee a first-time national champion for the ninth consectutive year. Game one is scheduled for 10 a.m. ET tomorrow with game two to follow at noon ET, and an if-necessary game scheduled for Tuesday, May 29 starting at 11 a.m. ET

The Screaming Eagles completed their rally from yesterday’s 4-0 deficit and walked off with a 5-4 eight-inning victory over Saint Leo, while the Hawks won the winner-take-all semifinal over Southern Arkansas, 3-0, behind a complete-game shutout from Morgan Perry.

The game was halted in the top of the sixth with the Screaming Eagles trailing 4-2 and concluded almost a full day after yesterday’s first pitch.

Southern Indiana’s Claire Johnson started her birthday off with a bang, clubbing a game-tying leadoff home run in the bottom of the seventh and hitting the RBI ground ball in the bottom of the eighth as the Screaming Eagles completed their 5-4 walk-off win over Saint Leo.

The game-winning run came when Taylor Ricketts beat the throw home on Johnson’s bases loaded ground ball to short that was bobbled.

Saint Leo jumped on Southern Indiana with four runs in the top of the first. Back-to-back RBI singles by Shyanne Dubois and Sarah Pauscher, followed by consecutive squeeze plays by Alexis Miniet and Bailey Burk gave the Lions the early advantage.

After her first-inning trouble, Jennifer Leonhart was back to her usual form, holding the Lions hitless until a one-out single in the top of the eighth. She was quickly erased on a inning-ending 4-6-3 double play.

The Screaming Eagles chipped away and started with a run in the bottom half of the first on Allison Schubert’s RBI double. They cut the lead in half on an RBI groundout in the fourth and made it 4-3 in the sixth.

The game was halted before the top of the sixth got underway and was resumed at 8:30 a.m. this morning.

Saint Anselm scored three runs in the top of the third and Morgan Perry tossed a complete-game shutout as the Hawks (44-11-1) defeated Southern Arkansas, 3-0, in the winner-take-all semifinal.

Perry scattered eight hits, struck out two and walk one to improve to 26-4 on the season. The Hawks made the most of their three hits as two of them came in the three-run third. RBI singles by Erin Thompson and Shannon Colson, sandwiched around a Megan Murrell sac fly, was more than enough for Perry.

Perry was efficient and got got the key outs when she needed them. Only four base runners reached scoring position and just one advanced to third.

The Lady Muleriders (60-11) record-breaking season comes to a close. Marina Duran and Hallie Saintignan each had two hits for SAU, who set several program records, including wins and home runs (113).