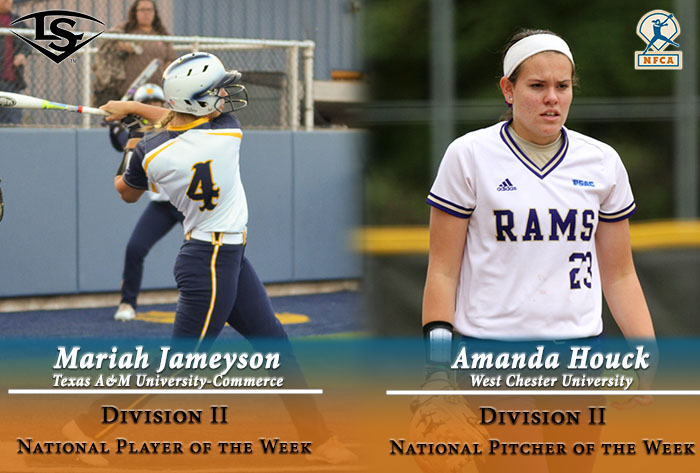 Jameyson, a junior from Seattle, Wash., hit .565 (13-for-23) with two doubles, five home runs, 11 RBI, 12 runs scored and a 1.304 slugging percentage. She recorded at least one hit in all seven contests, extending her hitting streak to 11, and also scored or drove in a run in six of seven games. Additionally, Jameyson drew six walks, struck out just once in 29 plate appearances and posted a .655 on-base percentage. Defensively, she threw out all four base runners attempting to steal. In game one against Texas A&M International, she went 3-for-3 with two homers and five RBI and scored three runs in game two.

Houck twirled two no-hitters last week, including a five-inning perfect game (four strikeouts) in her first start of the week against Wilmington, the first by a West Chester pitcher since 2006. She finished off the week with a six-inning no-no against Philadelphia University. The junior southpaw struck out seven and walked one to cap off a 4-0 week. The PSAC East and ECAC Pitcher of the Week also picked up wins in both games of doubleheader against Chowan. For the week, Houck posted a 0.55 ERA with 21 strikeouts to just one walk and held her opposition to a .148 batting average.