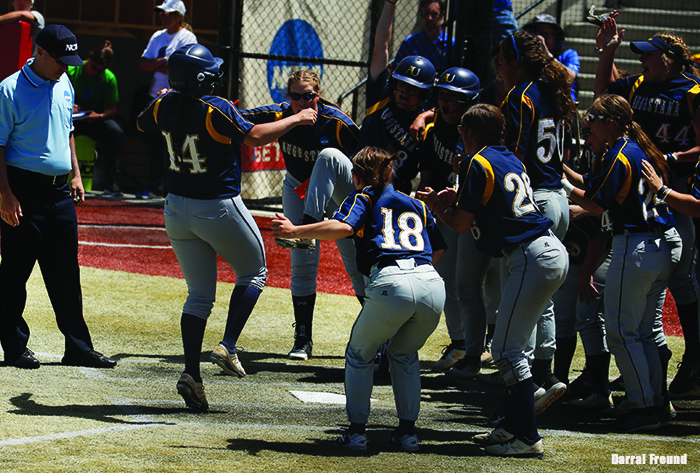 DENVER, Colo. – No. 4 Texas A&M-Kingsville and No. 3 Augustana are in the driver’s seat after picking up wins on day two of the NCAA Division II National Championships from the Regency Athletic Complex on the campus of Metro State. The duo advances to the semifinals and await their opponents, playing at 4 and 6:30 p.m. MT tomorrow.

Castillo fanned 11 with her only blemish being a Mountain Lion home run with one out in the seventh. Victoria Schoonard-Saborio left the yard for the second straight game with one out in the fifth to break the scoreless deadlock. With two outs, Veronica Chavez doubled the lead to 2-0 with a blast to leftfield.

Castillo and opening-day starter Breanna Smith have combined to allow two runs on 10 hits with 18 strikeouts.

Chapa drove in her second run and gave Castillo some breathing room in the top of seventh with a sac fly.

Nikkie Kovalesky put in a second straight strong start for YHC, but suffered the defeat. She surrendered two runs on four hits with two strikeouts and three walks in five innings of work. Louisa Disi tossed the final two innings, allowing an unearned run on one hit, fanning three and walking one.

Haylie Shope provided the only offense for YHC with her solo shot in the seventh. Jill Torres and Michalyn Bingham singled for the Mountain Lions.

Mickschl (29-5) has been stellar in two starts for the Vikings, allowing zero earned runs and three hits over 12 innings of work. In her second start, the third-team NFCA All-American kept UWF batters off balance, striking out one and walking two.

Pickett launched a two-run shot to put the Vikings on the board in the second. The 261-foot blast was her fourth of the season and the team’s 88th.

The Argonauts evened the score in the top of the fourth with only one hit. However, that hit was a game-tying RBI double off the bat of Kathleen Smiley, which came after a throwing error by the shortstop that allowed the first run to scoot home.

Augustana, which eventually left the bases loaded, answered with a run in the bottom half of the frame without the benefit of a hit to retake the lead at 3-2. Mickschl helped herself out with a seeing-eye RBI single in the fifth.

Kelsey Sweatt (19-4), a third-team NFCA All-American, suffered the loss in 3.1 innings of work. She allowed three runs on three hits with three walks and three punchouts. Grace Gilbert finished off the last 2.2 innings, surrendering one run on three hits with a walk.

Freshman Lydia Goble hit a two-run homer and Allison Lipovsky twirled a two-hit shutout as Grand Valley State knocked off LIU Post in the first elimination game. Goble’s two-run shot, a liner of the leftfield fence in the top of the first, was all Lipovsky needed. The first-team NFCA All-American struck out 12 Pioneers (51-13) en route to her 32ndvictory of the season.

The Lakers (50-9) would go on to record 10 hits, but could not push any more runs across as they left nine runners on base. Goble and Shannon Flaherty each record two hits apiece for GVSU.

LIU Post’s record-setting season came to a close with the defeat. Hanna Finkelstein and Megan Sneeden each recorded a hit for the Pioneers.

Keyed by a four-run sixth, No. 7 West Chester rallied from a 6-1 deficit over the final two innings to upend No. 6 UC San Diego, 7-6. The Golden Rams walked off with two outs when a grounder to short was misplayed, allowing Courtney Stump to score from third with the winning run.

Trailing 6-1 entering the bottom of the sixth, Emily Maseth started the rally, leading off the frame with a solo long ball to center. Jaime Klemas’ RBI single made it 6-3 ball game. A bases loaded walk and a RBI groundout to the pitcher cut WCU’s deficit to just one run at 6-5, setting up the bottom of the seventh.

With UCSD hanging on to an early 2-0 lead, Mikaila Reyes launched a three-run homer in the fifth to push its lead to 5-0. WCU’s AnnaMarie Hartman put the Golden Rams on the board with a run-scoring single in the fifth, but the Tritons regained their five-run advantage with a RBI double by Keila Bossinger.

Klemas had two of West Chester’s six hits, scored a run and drove one in.

UC San Diego’s season comes to an end. Clarissa Reynoso finished 2-for-3 with a run scored for the Tritons.