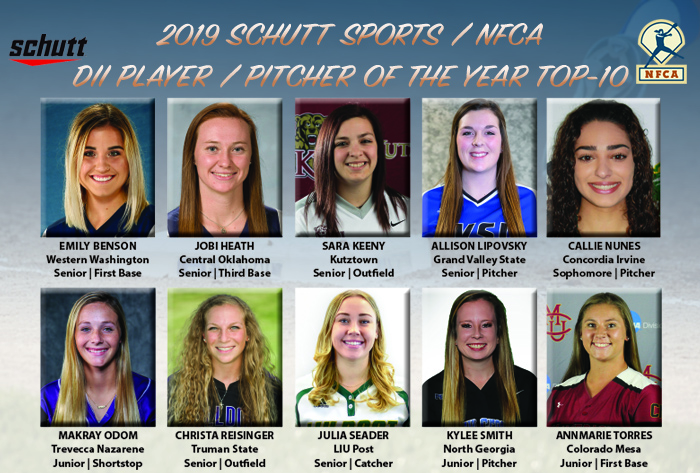 LOUISVILLE, Ky. – Ten finalists have been selected for the 2019 Schutt Sports/NFCA Division II National Player and Pitcher of the Year awards. The winners will be announced on May 30, following the conclusion of the 2019 season.

The finalists represent 10 different institutions and conferences. It marks the fifth straight season a student-athlete from North Georgia has been named to the list and the third time for NightHawk pitcher Kylee Smith, the 2018 recipient of this award.

The other two hurlers on the list, Grand Valley State’s Allison Lipovsky and Concordia Irvine’s Callie Nunes are repeat finalists. Truman State’s Christa Reisinger makes her second appearance, first earning the status in 2017 as a sophomore.

New in 2019 is the announcement of two awards - Schutt Sports /NFCA Player of the Year and Schutt Sports / NFCA Pitcher of the Year. The respective winners will come from the top-10 list and will be voted on by the NFCA Division II All-American Committee.

The award was created in 2015 to honor the outstanding athletic achievement among softball student-athletes throughout Division II.