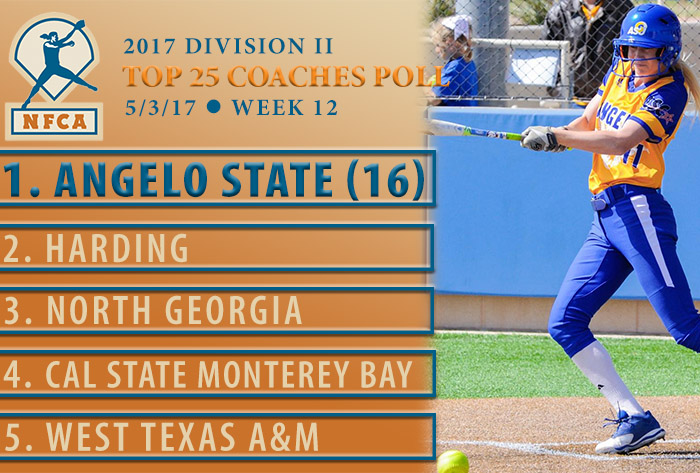 The Rambelles (51-4) and Lady Buffs (40-9) are the top two seeds in this week’s single-elimination Lone Star Conference (LSC) Tournament with possibility of a top-five clash in the championship game. LSC regular season champion Angelo State, which has won 16 straight, capped off its regular season with two LSC road wins at Cameron (6-5, 10-3), while WT also won on the road, sweeping a three-game LSC set from Eastern New Mexico (15-1, 7-2, 9-1).

Remaining at No. 2, Harding heads into Great American Conference (GAC) tournament as the top seed and regular season champs. Following a 5-1 week, the Bison (50-6) became just the second GAC program to reach the 50-win plateau, the first to do it during the regular season.

Southern Indiana dropped a spot to No. 6 after splitting a Great Lakes Valley Conference (GLVC) twinbill with Quincy. The Eagles (40-10) earned a share of the GLVC regular season title and will be the top seed at this week’s tournament in East Peoria, Ill.

West Virginia Wesleyan is riding a 15 game-winning streak and moved up one position to No. 7. The Bobcats (40-6) are the Mount East Conference (MEC) regular season champs and will be the top seed at the MEC Tournament in Salem, Va. WVWC capped off its regular season with a pair of doubleheader sweeps of Glenville State and Concord.

Pfeiffer dipped two spots to No. 8 after putting in a runner-up performance at the Conference Carolinas Tournament. The Falcons (44-6) battled back from the loser’s bracket to reach the title game, but fell to North Greenville, 4-0.

New to the top-10 this week is No. 10 West Florida. The Argos (39-12) swept Lee in their final Gulf South Conference (GSC) series and locked up the No. 2 seed for the GSC tournament in Huntsville, Ala.

Regular season Mid-American Intercollegiate Athletic Conference (MIAA) champions Central Oklahoma made the biggest climb this week, moving up five spots to No. 16 after sweeping through the MIAA tournament to claim their first title since joining the league in 2013.

NE-10 Southwest Division champion Adelphi jumped into the No. 25 spot, while previous-No. 23 New Haven fell out of the top-25.