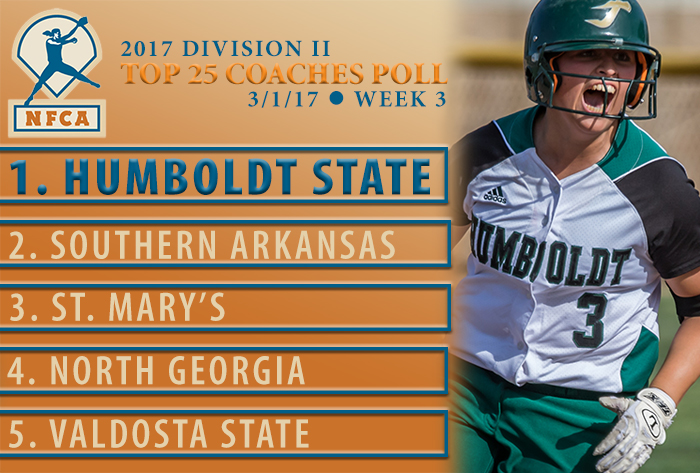 LOUISVILLE, Ky. – As the shuffling continued, the top three spots remained the same in week three of the 2017 NFCA Division II Top 25 Coaches Poll, announced the Association on Wednesday morning. Humboldt State continued as the unanimous No. 1 for the second straight week, followed by No. 2 Southern Arkansas and No. 3 St. Mary’s, while five new programs entered the poll, including first-timers No. 18 Pfeiffer and No. 22 Lubbock Christian.

After a near three-week layoff due to weather, the Jacks (9-0), who received all 16 first-place votes and 400 points, didn’t show any signs of rust, sweeping San Francisco State in a California Collegiate Athletic Association four-game road series, posting a pair of shutouts.

Grand Valley State (291) opened 2017 with a 3-1 showing at the Lewis Dome Tournament and fell from a tie for fourth to seventh. Chico State (266) and Lenoir Rhyne (258) rounded out the top ten, moving up one and two spots, respectively.