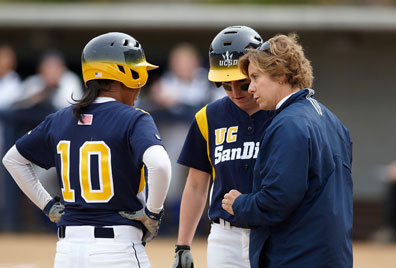 The Tritons went 45-13 overall and 22-9 in the California Collegiate Athletics Conference to clinch the first regular-season league title in program history. The 45 wins by the 2011 team is a new school record and the .775 winning percentage also broke the program’s previous top mark.

In the postseason, despite finishing second in the CCAA tournament, UC San Diego earned the top seed in the west region and made its fifth overall appearance in the NCAA Division II tournament. After going just 2-8 in their previous five appearances, the Tritons blazed though the regionals and super regionals with a perfect 5-0 record.

After dominating performances in the first two rounds, when UC San Diego got to Salem for its first NCAA Championship appearance, it was more of the same for the Tritons. Gerckens’ team went 4-0 at the final site, including a 10-3 rout of then top-ranked Alabama-Huntsville in the championship game.

Leading the Tritons on the field this season was junior pitcher and 2011 Louisville Slugger/NFCA Second-Team All-American Camille Gaito. Gaito finished the year at 35-4 with 208 strikeouts, just 28 walks and one of the lowest ERA’s in the nation at 0.75.

After 19 seasons at the helm in San Diego, the 2011 CCCA Coach of the Year has amassed an impressive career record of 484-433 with 12 winning seasons. Of the 12 winning seasons, Gerckens has now won 30 or more games on seven occasions.

For their work this season, Gerckens and staff also earned the West Region Coaching Staff of the Year award.


Other regional winners this season were:

Indiana tied a school record of 38 wins this season en route to their historic first appearance in the NCAA Championship. Along the way, the Crimson Hawks also claimed their first-ever PSAC and NCAA regional titles. Senior pitcher Erin Holloway, a 2011 Louisville Slugger/NFCA First-Team All-American, played a key role in Indiana’s season by going 27-5 in the circle with a 1.50 ERA and 247 strikeouts.

Minnesota State Mankato made its first appearance in the NCAA Championship in over 20 years this season and finished the year at 54-11, setting a new school record for wins. The Mavericks advanced to their fifth consecutive NCAA tournament in 2011, after finishing second in the Northern Sun Intercollegiate Conference tournament. Helping Mankato this season was freshman designated player and 2011 Louisville Slugger/NFCA Second-Team All-American Lindsay Erickson. Erickson led the Mavericks in her first year with the program by hitting .413 with 31 runs and 42 RBIs.

C.W. Post finished the year at 41-16 and made its 10th consecutive trip to the NCAA tournament. The Pioneers made their third trip to the NCAA Championship in five seasons after winning both the regionals and super regional without dropping a game. 2011 Louisville Slugger/NFCA First-Team All-American Nicole Hagenah gave C.W. Post a big boost at third base this season by hitting .452 as a freshman and fielding at .929 percent.

Grand Valley led the nation in offense this season with a .366 team batting average and parlayed that power into a 41-16 record. The Lakers won their second region title in program history this season, before falling to NCAA Championship qualifier Saginaw Valley in the super regionals. Helping lead the Lakers this season was sophomore designated player Katie Martin. Martin earned 2011 Louisville Slugger/NFCA All-America first-team honors this season by leading the potent Laker offense with a .468 batting average and a .898 slugging percentage.

Alabama-Huntsville finished its 2011 campaign at 48-6-1 and came within one game of claiming the national title. Having spent the last half of the season as the No. 1 team in the land, the Chargers won eight of nine NCAA tournament games before falling in the championship game. The Gulf South Conference East Division regular season champions were led this season in part by utility player Mary Kelley, a 2011 Louisville Slugger/NFCA First-Team All-American. Kelley batted .366 on the year with 51 RBIs and 23 extra-base hits.

North Georgia claimed its third consecutive south region award by going 53-12 and advancing to the NCAA championship for the third straight year. The Saints won both the Peach Belt regular-season and tournament titles before sweeping through regional and super regional play with just one loss. 2011 Louisville Slugger/NFCA First-Team All-American pitcher Jessica Coan had a terrific first year with the Saints by going 27-5 with 334 strikeouts and a 1.09 ERA, all while while limiting opponents to a meager .151 average.

Midwestern State took home its second straight south central region award after a 54-14 campaign in 2011. The Mustangs advanced to the NCAA Championship for the first time in program history the hard way by battling though a loss in both regional and super regional play. Helping lead Midwestern State this season was 2011 Louisville Slugger/NFCA First-Team All-American pitcher and Collegiate Women’s Sports Awards Division II Athlete of the Year nominee Brittney Tanner. Tanner had an incredible year in the circle for the Mustangs and finished with a 31-9 record, a 1.45 ERA and 361 strikeouts.