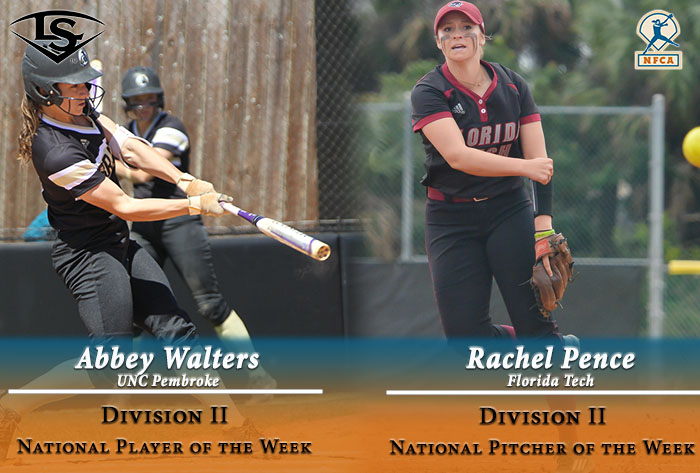 Walters, hailing from Bladenboro, N.C., put forth a tremendous showing at the plate and in the circle in keying UNC Pembroke to a 4-2 showing last week. The senior hit .765 (13-for-17) with nine extra-base hits- six doubles and three home runs- and 10 RBI, while tossing a no-hitter and holding her opponents to a .179 batting average in three starts. She scored 12 times, swiped five bases, slugged a whopping 1.647 and posted a .762 on-base percentage.

On Feb. 9, she launched a school-record three home runs, drove in five and scored four times in a victory over Queens (N.C.). Two day later against Barton, she tossed a near perfect game. Walters fanned seven Bulldogs and walked one for her second career no-hitter. The Peach Belt Conference Pitcher of the Week, allowed just three earned runs and struck out 12. Additionally, she went a perfect 4-for-4 with four doubles, four RBI and five runs in the doubleheader sweep of Barton.

Pence, selected the Sunshine State Conference Player of the Week, had a stellar weekend in the circle for the Panthers. Named the NFCA Division Leadoff Classic MVP, Pence helped FIT finish 4-1 at the Leadoff with complete-game wins over then-No. 10 Wayne State (Mich.), then-No. 12 St. Mary’s and Georgia College, along with a two-inning save versus Central Missouri. For the weekend, Pence finished 3-0 with a save and 21 strikeouts to just three walks.

The senior from Jacksonville, Fla. opened with nine-strikeout, zero-walk performance against the 12th-ranked Rattlers. Pence followed with a one-hit shutout against the Warriors. She fanned three and did not issue a free pass. In her save against the Jennies, the right-handed hurler struck out four and walked one.