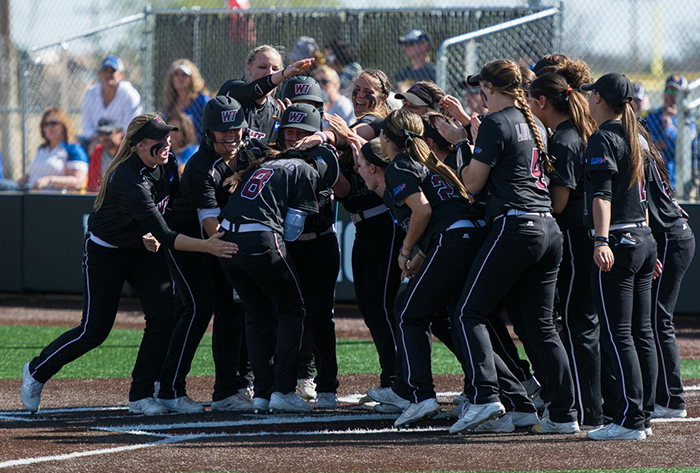 LOUISVILLE, Ky. – Entering the final week of the regular season, West Texas A&M makes its return to No. 1 in this week’s NFCA Division II Top 25 Coaches Poll, announced by the Association on Wednesday morning. The Lady Buffs (45-2), who won their only game of the week against Lubbock Christian, picked up 12 first-place votes and 396 points moving back into the top position after three weeks at No. 2.

With WT’s move to the top, previous No. 1 Indianapolis (42-3) fell to No. 2 following a 4-2 week, splitting a pair of Great Lakes Valley Conference (GLVC) twinbills, including a top-10 match at then-No. 8 UMSL (3-2, 1-2). Earlier in the week, Greyhound pitcher Morgan Foley became the fourth DII pitcher to reach the 1,500-strikeout total in a 9-1 victory over Urbana. The Greyhounds garnered three first-place votes and 384 points.

After a 10-0 week which moved No. 3 Humboldt State into 40-win territory, the Jacks (45-3-1) earned the final first-place vote and 370 points. Humboldt State swept two California Collegiate Athletic Conference series and also a doubleheader from at Dominican (Calif.) to extend its winning streak to 20 games, second longest current streak in Division II.

North Alabama and North Georgia each moved up one spot to round out the top-five, while UMSL jumped two spots to No. 6. The Lions (43-5) swept Gulf South foe Union, while the Nighthawks won both ends of a Peach Belt twin bill, including a 1-0 14-inning thriller to claim the league’s regular season title for the third consecutive season. The Tritons (44-5) went 3-1 in GLVC play.

Previous No. 4 Saint Leo (37-4) suffered three losses to Palm Beach Atlantic after sweeping a mid-week Sunshine State series from Florida Tech and fell three notches to No. 7. The Lions did secure the league title over the weekend, their second in program history. The first came in 2013. Arkansas Tech (41-6) slipped from No. 7 to No. 8 after a 3-1 showing.

California (Pa.) inched up a spot to No. 9 as it posted a 7-1 week in Pennsylvania State Athletic Conference play. The Vulcans (28-2) league doubleheaders at Edinboro, at Seton Hill and Mercyhurt. In its final twin bill of the week, Cal suffered its first loss since the season opener, snapping a 27-game winning streak. Coming off a mid-week sweep of Texas A&M University-Kingsville, St. Mary’s (36-9) moves back in to finalize the top 10.