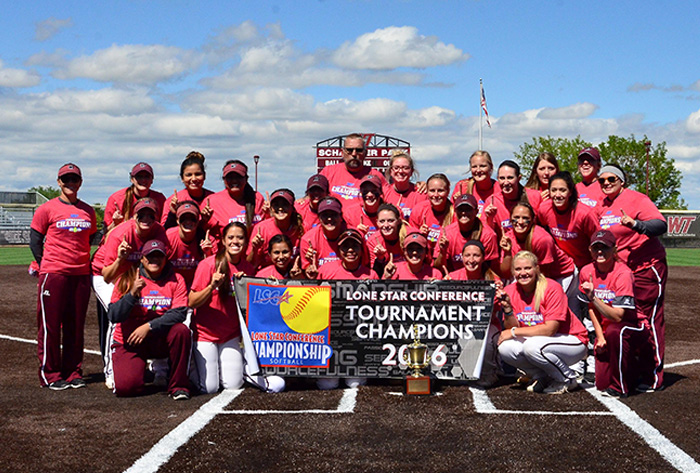 LOUISVILLE, Ky. – Behind a second straight Lone Star Conference Tournament title, West Texas A&M is the unanimous No. 1 choice in the final NFCA Division II Top 25 Coaches Poll of the regular season, announced by the Association on Wednesday morning. With the regular season finished and the NCAA Championship field set, the final poll will be announced on May 25.

The Lady Buffs (52-2) homered five times in the 9-3 title-game win over Texas Woman’s to collect their third league title overall and enter the postseason as the No. 1 and host seed of the South Central Regional. WT reached the championship game with a 6-5 win over Angelo State in a nine-inning thriller.

Backed by the pitching of Great Lakes Valley Conference Pitcher of the Year Morgan Foley (4-0, 0.54 ERA, 8 H, 48 K, 6 BB, 26 IP), which included a no-hitter against Truman State, a solid defense and timely hitting, Indianapolis won four games to claim the 2016 GLVC championship. The Greyhounds (50-3) swept through their competition, dispatching Williams Jewell (2-1 in 8), Truman State (2-0), Southern Indiana (8-0) and No. 6 UMSL (7-1) in route to its second overall league title. Indianapolis is the No. 1 seed and host of the Midwest Regional.

Following two losses in the California Collegiate Athletic Association (CCAA) Tournament, Humboldt State slipped out of the third position to No. 5 for the first time since March 23. The Jacks (45-5-1) are the No. 1 seed and host of the West Regional.

Gulf South Conference regular season and tournament champion North Alabama moved to No. 3 after winning its first league title since 1987 with three wins over the weekend. After back-to-back shutouts of Delta State (4-0) and then-No. 21 Valdosta (8-0), the Lions (49-5) took home the championship behind a conference-record 18-run fourth inning, which saw 22 batters and three pitching changes, in a 19-9 victory over the Blazers.

Defending National Champion and Southeast Region No. 1 seed North Georgia moved up a spot after it enjoyed a weekend off following the Nighthawks’ third straight Peach Belt title.

No. 6 UMSL, runner-up to Indianapolis, reached the 50-win plateau during its run to the GLVC title game, which included three wins on the final day of the tournament. The Tritons (52-7) are the No. 2 seed in the Midwest Region and will host the second four-team regional.

Regular season champions, Arkansas Tech (Great American Conference) and Saint Leo (Sunshine State) moved into the No. 7 and 8 spots. The Golden Suns (46-9) are the Central Region’s No. 1 seed, while the Lions (38-6) travel to Valdosta State as the No. 4 seed in the South Region. Heartland regular season champion and tournament runner-up St. Mary’s remained in the ninth position and will host the other South Central regional as the No. 2 seed.

There was major shuffling in the rest of the poll. Along with Pennsylvania State Athletic Conference (PSAC) runner-up California (35-4) falling 13 spots to No. 20, No. 12 West Chester dropped out of the poll completely with a two-and-out performance at the PSAC Tournament.

PSAC tournament champion Bloomsburg (44-7) received its first votes of the year and is ranked 19th, while Mountain East Tournament champion West Virginia Wesleyan (50-8) moved up 12 spots after winning three elimination games to earn the title and top seed in the Atlantic Region.

Also ranked for the first time this season is Great Northwest Athletic Conference regular season and tournament champion, Central Washington. The 21st-ranked Wildcats (38-14) rebounded from a first-round loss and reeled off four straight wins, including two over Western Oregon to collect its first GNAC tournament title. It also marked the first time a program came out of the losers bracket to win. Central Washington is the second seed in the West and will travel to Azusa Pacific for its four-team regional.

No. 22 West Florida, No. 23 LIU Post, No. 25 (tie) Catawba and No. 25 (tie) Texas Woman’s all return to the top 25. Along with West Chester, California Baptist, Colorado Mesa, Charleston and Adelphi fell out.

The NFCA Division II Top 25 Coaches Poll is voted on by 16 NCAA Division II head coaches, two representing each of the eight NCAA regions. Records reflect games played through May 1.