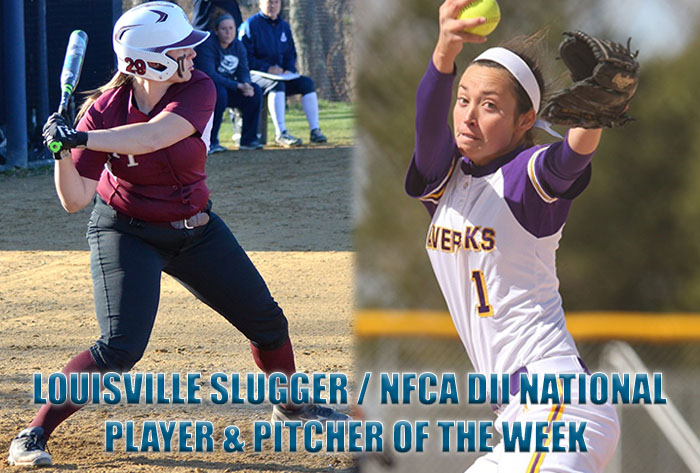 LOUISVILLE, Ky. – A monster week at the plate and a dominant outing in the circle earnedFranklin Pierce’s Erin Wood and Minnesota State’s Coley Ries Louisville/Slugger NFCA Division II National Player and Pitcher of the Week honors for games played April 11-17, announced the association on Wednesday afternoon.

Wood was a run-producing machine last week for Franklin Pierce. The senior infielder drove in 16 runs and scored seven more thanks to four doubles and five home runs over an eight-game stretch. Wood hit .571 (16-for 28) with six multiple-hit contests, slugged 1.250 and struck out just once in 29 plate appearances.

Knocking in at least one run each contest, Wood’s, biggest production came in game one of a doubleheader at Saint Anselm in which she went 4-for-4 with a pair of homers, four RBI and three runs scored. She doubled twice and registered three RBI in game two against Saint Michaels and also knocked in three with a long ball in game two of a four-game series at Merrimack. In that series alone, Wood left the yard three times.

Ries had a game to remember that propelled her into the Minnesota State annals. Locked in a pitcher’s duel at Winona State, the Eagle Lake, Minn. native struck out 24 batters in a one-hit 10-inning shutout of the Warriors on April 12. In her gem of a performance, Ries, who carried a no-hitter into the seventh, recorded a program record in punchouts and the fourth highest total in Division II history.

“It feels awesome to be nationally recognized and I couldn’t have done it without my teammates, because personal accolades come from team success,” said Ries. “It’s been a really fun season and we hope it continues.”

Not to overshadow the rest of her week, Ries posted shutout outings in wins over Minot State and University of Mary. In the latter contest, she struck out nine. For the week, the junior hurler walked three and held her opponents to a .083 batting average.

“It’s a great honor for Coley and for Minnesota State,” Meyer said.  “This is the first time one of our pitchers has received National Pitcher of the Week honors from the NFCA. I’ve seen a lot of softball games in my career, but her performance against Winona State (April 12) was one of the top pitching performances that I have witnessed.”

“Coley is a fierce competitor and student of the game and is one of the team leaders that is helping us achieve our goals this season. She is also a very unselfish teammate who places team accomplishments ahead of her own.”