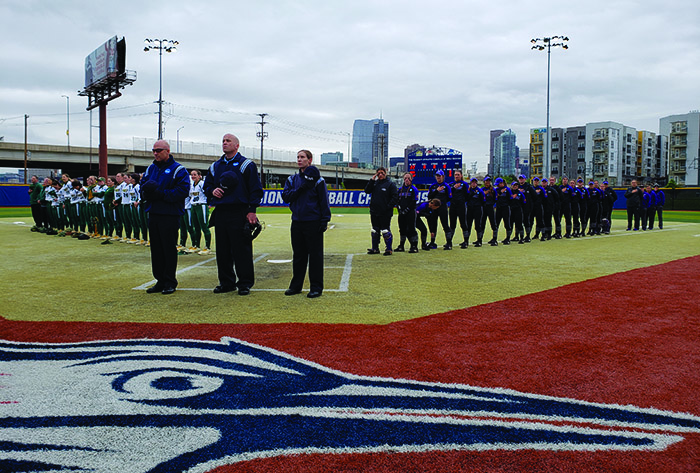 DENVER, Colo. – Young Harris, Texas A&M-Kingsville, West Florida and Augustana posted wins on the first day of the NCAA Division National Championships from the Regency Athletic Complex on the campus of Metro State.

Maddie Urquiola keyed a 17-hit attack as No. 8 Young Harris knocked off No. 1 LIU Post in the opening game of the 2019 NCAA Championships. The victory for the Mountain Lions came in the program’s first-ever national tournament appearance and marked the second straight season the No. 8 team won the opener.

Urquiola, the No. 9 batter, was the game’s offensive sparkplug finishing 3-for-3 with three doubles, four RBI and a run scored. Joining her in the three-hit department was catcher Jill Torres, who went 3-for-5 with a pair of two-baggers.

The Mountain Lions grabbed a quick 2-0 lead with RBI doubles by Haylie Shope and Urquiola in the first and second inning, respectively. It didn’t last long as Abbey Fortin put the Pioneers (51-12) on the board in the bottom half of the second with a solo shot to center. They would take a brief 3-2 lead on Ashley Melendez’s RBI single and a throwing error on the same play allowing the go-ahead run to score.

Another Urquiola RBI double and Emily Harris’ successful squeeze pushed Young Harris back into the lead for good at 4-3 in the fourth. The Mountain Lions extended their lead to 9-3 with three runs in the fifth and two more in the sixth.

Harris finished 2-for-5 with two RBI. Nikki Kovalsky went the distance for the YCH to improve to 29-11 on the year. She allowed two earned runs with four walks and three strikeouts

The Pioneers finished with eight hits, three off the bat of Melendez. Katie Humhej (26-6) suffered the loss, lasting three-plus innings and surrendering four runs, three earned, on seven hits. She did not walk or strikeout at batter.

Victoria Schoonard-Saborio hit a two-out two-run homer in the bottom of the sixth to lift No. 4 Texas A&M-Kingsville to a 2-1 victory over No. 5 Grand Valley State. The long ball gave the Javelinas their first NCAA Championship win in their first-ever appearance and extended their winning streak to 16 games.

Prior to the home run, Laker hurler and Schutt Sports / NFCA Pitcher of the Year finalist Allison Lipovsky, was cruising along, allowing just two hits over 5.2 innings. Lipovsky (31-3), finished the game with seven punchouts and one free pass.

TAMUK’s Breanna Smith settled down after allowing a first-inning round tripper to earn the complete-game win. The southpaw scattered seven hits, struck out seven and walked just one to improve to 21-3.

Taylor Rieger provided the only offense for Grand Valley, which had its 15-game winning streak snapped, with a solo homer in the top of the first. She was one of seven Lakers (49-9) to record a base hit.

Grace Gilbert went the distance in the circle and was 3-for-3 at the plate, keying West Florida to a 5-1 win over West Chester. Gilbert allowed a run on six hits with three strikeouts and one walk. She also scored twice, including the eventual game-winning run in the second inning.

The Argonauts scored a run in each of the first two innings to grab a quick 2-0 lead. After opening the scoring on a fielder’s choice in the first, Mika Garcia drove in Gilbert with an RBI triple in the second.

After squandering a golden opportunity in the top of the first, the Golden Rams (39-21) got on the board in the third when Heidi McCollester scored on a ground ball that was misplayed by the first baseman.

However, that would be it for the WCU offense as Gilbert kept it off the scoreboard the rest of the game.

UWF gave Gilbert some breathing room thanks to a solo home run in the fifth by Jacquelynne Poling and a bases loaded walk, followed by Poling scoring on a wild pitch in the sixth.

Behind an 11-hit attack and Ashley Mickschl’s one-hit shutout, Augustana blanked UC San Diego, 8-0, in five innings. Mickschl struck out three and walked one, while going 2-for-3 with a double and two RBI at the plate.

Mary Pardo made an opening statement for the Vikings with a leadoff blast deep over the right centerfield fence in the bottom of the first. They added two more in the second on Mickschl’s two-out, two-run double.

Augustana broke it open with a four-run third, highlighted by Shannon Petersen’s two-run moonshot down the leftfield line. Kara McDougall capped off the inning, driving in two runs with a double just fair inside the third base bag.

Maggie Kadrlik finished 3-for-3 with a double for the Vikings. Pardo was 2-for-3 with two RBI, while Petersen drove in two and scored twice.

Keila Bosinger recorded the Triton’s (37-16) only hit, a double in the fourth.