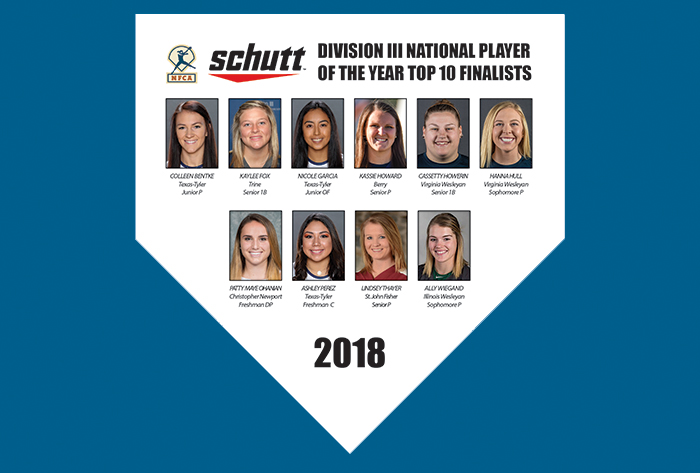 LOUISVILLE, Ky. – Ten student-athletes have been named as finalists for the 2018 Schutt Sports/NFCA Division III National Player of the Year award, the Association announced on Thursday.

Senior pitcher Kassie Howard is Berry College’s representative on the list, boasting a 25-1 record, 0.74 ERA, 14 complete games, six shutouts, one save, 32 walks and 197 strikeouts. She also has a .348 average, four runs, eight hits, a triple and five RBI in limited time on offense.

The Atlantic region has the most representatives, with four, followed by the West with three. The Central, Great Lakes and Northeast each have one finalist. There are four seniors, two juniors, two sophomores and two freshmen being recognized.

The list, which started at 50 prior to the season, was reduced to 25 finalists at midseason, and now 10 heading into Super Regionals. The winner will be announced following the completion of the NCAA championship in two weeks.

Texas-Tyler pitcher Kelsie Batten was the inaugural Player of the Year award recipient in 2016.