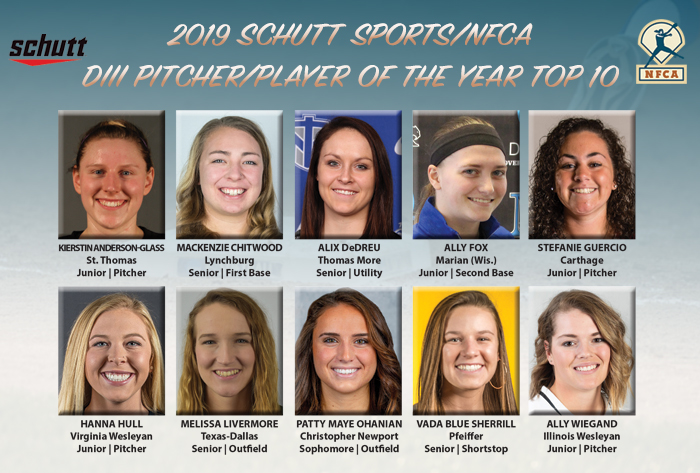 LOUISVILLE, Ky. – Ten student-athletes have been named as finalists for the 2019 Schutt Sports/NFCA Division III National Pitcher and Player of the Year award, the Association announced on Tuesday.

Anderson-Glass heads into the NCAA Division III championship finals later this week with a 26-3 record and 0.66 ERA, while recording 15 shutouts and 121 strikeouts over 179 innings.

University of Lynchburg first baseman Mackenzie Chitwood capped her career with a powerful season, hitting .382 with a Division III-leading 21 homers and 72 RBI. In all, she collected 34 extra-base hits and scored 47 runs in 52 games.

Versatile Thomas More University senior Alix DeDreu has the most doubles (26) and second-most hits (77) in the country, while playing a mix of pitcher, second base and shortstop. For the season, she hit .490 while striking out just three times in 157 at-bats.

Melissa Livermore finished her four years at the University of Texas at Dallas with an NCAA Division III-record 195 stolen bases. This season, the speedy leadoff batter hit .485 with 38 runs, 63 hits, 20 RBI and 41 steals in 44 attempts.

Patty Maye Ohanian, who made the final 10 as a freshman last season, closed another solid campaign with a .455 average, 47 runs, 66 hits, 13 doubles, a triple, 14 homers and 53 RBI for Christopher Newport University.

Hull, Ohanian and Wiegand were all among the final 10 student-athletes on the list last season.

The Atlantic region has the most representatives remaining on the list, with four, followed by the Great Lakes with three. The Central, Midwest and West each have one finalist. There are five juniors, four seniors and one sophomore being recognized.

The list started with 50 names before the season, and was reduced to 25 ahead of NCAA regionals. The winners of the Player of the Year and new Pitcher of the Year honors will come from this group of 10 finalists and be announced following the completion of the NCAA championship finals in Tyler, Texas.

The list is compiled annually by the NFCA’s Division III All-America committee.

Melissa Livermore, Sr., OF, University of Texas at Dallas