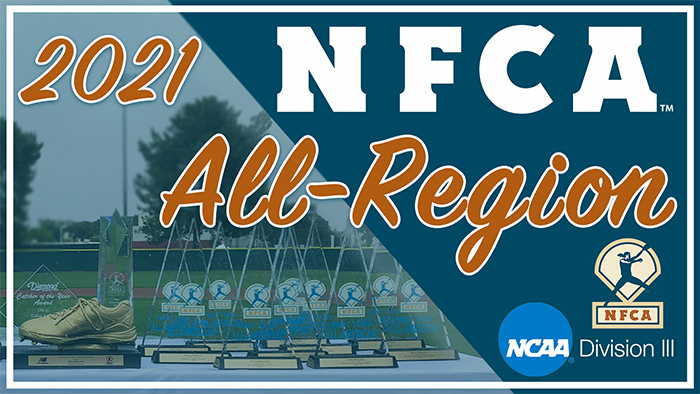 The awards salute student-athletes from the Association’s eight NCAA regions with first, second and third-team honors. NFCA member coaches voted on the teams in their respective regions, and all honorees are eligible for selection to the 2021 NFCA Division III All-America squads.

Top-ranked and defending national champion Texas Lutheran led all schools with eight All-Region selections in the West, five of which were voted to the first team. Three others — second-ranked (tied) Virginia Wesleyan in the Atlantic, No. 6 Eastern Connecticut State in New England, and 14th-ranked The College of New Jersey in the East — had seven honorees apiece.

The West also had the two teams with the second-highest total — No. 7 East Texas Baptist and eighth-ranked Linfield —each with six players recognized.

Four schools in the Northeast tied for top honors, with Alfred, Cortland, Ithaca and Manhattanville all collecting five awards, while Milwaukee School of Engineering had five players on the Great Lakes squad. Bethel (Minn.), St. Scholastica, No. 21 St. Olaf and 24th-ranked Wartburg shared top honors in the Midwest with four selections each.

No. 16 Mount Union led all Central schools with four honorees, and second-ranked (tied) DePauw was one of five teams with three selections in that region.

New in 2021, conference players and pitchers of the year from member institutions, who were nominated by their member head coach, are added to the third team if they were not already voted to an All-Region squad. Where there were ties in the balloting, all players involved in the tie were awarded honors. If there were not enough nominees for a position, all three teams for that position in that region were not filled.

The 2021 NFCA Division III All-America teams will be announced on May 24.