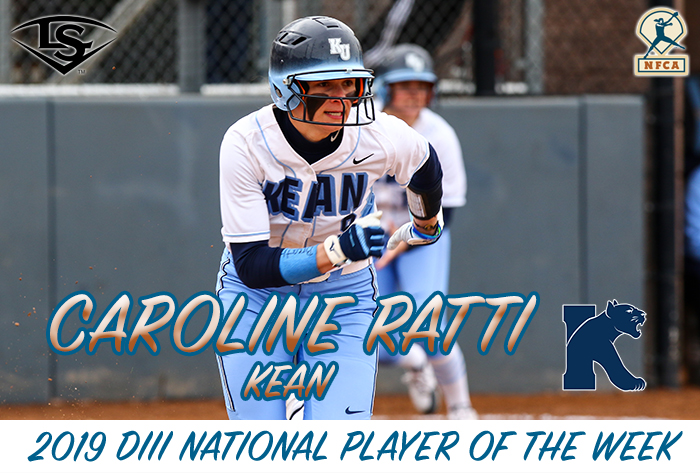 Junior Anderson-Glass went 4-0 with a 0.00 earned-run average this past week. The Inver Grove Heights, Minn., native allowed no runs, no walks, just nine hits and struck out 20 over 19.1 innings in the circle. She took a perfect game into the final inning against Wisconsin-Stout on Friday, but yielded an one-out single to Kyncaide Diedrich in the seventh before retiring the last two batters in order.

Ratti, meanwhile, hit .667 for the Cougars, going 10-for-15 with eight runs, three doubles, a triple, homer and eight runs batted in. The senior from South Plainfield, N.J., also had three steals and was perfect in the field (six putouts and one outfield assist) for the week.

Moravian sophomore pitcher Meghan Bauer notched a win and a save in a 3-1 week for the Greyhounds, tossing a shutout and compiling a 0.00 ERA. … Moravian sophomore shortstop Maddisen Bieber was 7-for-11 (.636) with four runs, a double and two RBI. … Tufts senior utility player Kristen Caporelli hit .778 (7-for-9) with six runs, two doubles, three walks, and five RBI, while playing three different positions for the Jumbos. … East Texas Baptist freshman outfielder Corley Carpenter excelled in a three-game rivalry series against Texas-Tyler, hitting .692 with nine hits, including four doubles. She was 5-for-6 and had the game-winning RBI in the 10th inning of the Tigers’ 5-4 victory on Friday. …  St. Olaf senior catcher Emily Carr became her school’s career leader in RBI (104) with a first-inning grand slam on Saturday. For the week, she hit .700 with four runs (including the 100th of her career), three doubles and 12 RBI. … St. Thomas senior outfielder Dana Connelly was 10-of-18 (.556) with seven extra-base hits and 11 RBI, including seven RBI in one game against Wisconsin-Stout. … Rowan junior pitcher Jesse DeDomenico scored four wins in five appearances and fanned 22 over 19.2 innings. … Saint Joseph’s (Brooklyn) freshman third baseman Ashleigh Hartwig went 6-for-6 in a sweep of Sarah Lawrence, with all six hits going for extra bases, including two homers in the second game. She hit .750 with four doubles for the week. … Chatham junior pitcher Madison Howell had a big doubleheader on Saturday, pitching a shutout in the first game and hitting a homer in the second. … Geneva sophomore third baseman Marina Manuppelli hit a two-out, three-run walkoff homer against Carnegie Mellon and hit .692 (9-for-13) with three doubles and 11 RBI for the week. … Saint Joseph’s (Brooklyn) freshman pitcher Jessica Mecham tossed a pair of three-hit shutouts and also helped herself at the plate with a .571 average. … Illinois Wesleyan freshman first baseman Colleen Palczynski batted .524 with eight runs, two doubles, three homers and eight RBI. … Randolph-Macon junior third baseman Taylor Sanderford hit .556 with a double, triple and five RBI. …  Randolph-Macon senior pitcher Candace Whittemore had two complete games and a 0.50 ERA for the week. She allowed just five hits and struck out 20, including 13 against Ferrum, and also batted .471. … Illinois Wesleyan junior pitcher Ally Wiegand posted a 0.33 ERA while going 4-0 with no walks and 38 strikeouts.