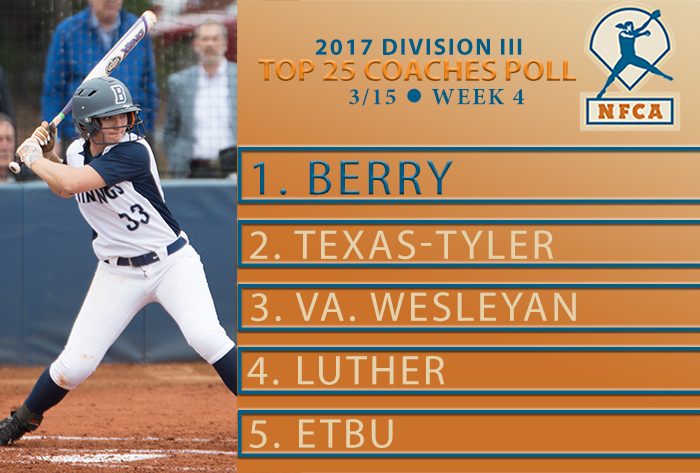 LOUISVILLE, Ky. — Berry College is the new No. 1 team in the NFCA Top 25 softball rankings, dethroning defending national champion Texas-Tyler, which had held the top spot for the past five weeks and 15 of the last 17 polls.

The (19-1) Vikings received seven of the eight first-place votes prior to Tuesday’s doubleheader split at Claremont-Mudd-Scripps. Berry had won 19 straight games to start the season and captured five of its last six games by run rule.

The (19-2) Patriots, meanwhile, have lost two of their last six games following a 15-0 start. Their latest loss came to then-No. 3 East Texas Baptist — 3-2 in eight innings — last Wednesday in the middle game of their American Southwest Conference matchup.

Virginia Wesleyan (17-1), which suffered its first loss on Sunday in the first game of a twinbill with then-No. 10 Christopher Newport, received this week’s other first-place vote to move up another three places to third in the poll. The Marlins were the last team not named Texas-Tyler to hold the No. 1 spot, residing there for two straight weeks last May, before the Patriots reclaimed the top spot for 2016’s final ranking.