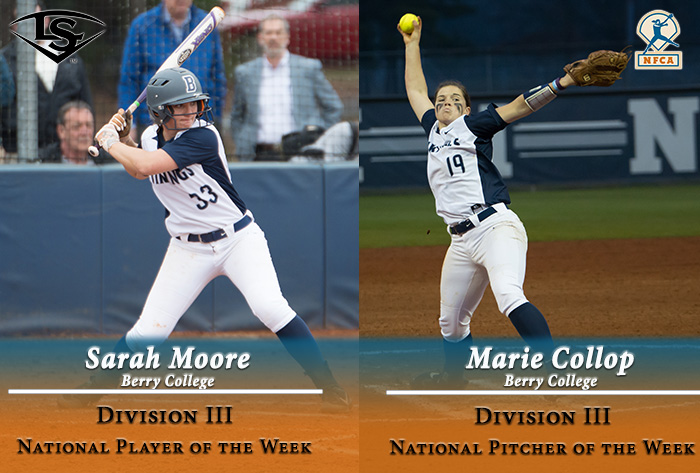 LOUISVILLE, Ky. — For just the second time, and the first time since 2015, one school has swept the Louisville Slugger/NFCA Division III National Pitcher and Player of the Week honors.

But that’s just what Berry College’s Marie Collop and Sarah Moore did after an outstanding week for the (8-0) Vikings, who swept two top 10 teams in a four-win week.

Collop, a senior right-hander from Atlanta, pitched a no-hitter in Berry’s 10-0 run-rule victory over then-No. 7 Texas Lutheran, striking out seven over five innings, which was her second straight no-hitter. The Lakeside High product then allowed five hits and two earned runs while fanning four in a 14-2 five-inning win over No. 4 Emory the next day to improve to 3-0 on the season.

She also helped herself at the plate, hitting .385 in the Vikings’ 4-0 week, with three runs scored, one walk and six runs batted in.

Meanwhile, Lookout Mountain, Ga., native Moore was 6-for-12 (.500) for the week, with four hits in seven at-bats against reigning NCAA Mount Berry Regional champ Emory, including two doubles and six RBI. Against fellow NCAA participant Texas Lutheran, the senior shortstop knocked in two more runs with a hit and also walked twice in the run rule-shortened first game, then added another hit and RBI in the nightcap. The Baylor High graduate posted an on-base percentage of .571 and a .750 slugging percentage for the week.

Meredith College junior pitcher Taylor Jackson struck out two and allowed three earned runs in a 5-4 complete-game victory over nationally-ranked Christopher Newport. … Guilford junior outfielder Darby Kozan batted .768 (11-for-14) with four runs, a triple, two RBI and a .929 slugging percentage. She had four multi-hit games, including her first career four-hit contest, while playing flawlessly in the field (eight putouts, one assist). … East Texas Baptist senior right fielder Jayme Perez hit two homers and had four RBI in the middle contest of a three-game American Southwest Conference series against LeTourneau. For the week, she was 5-for-9 (.556) with five runs scored, two times hit by pitch, a stolen base and just one strikeout. … East Texas Baptist junior pitcher Rocki Tello went 2-0 with one earned run, three strikeouts, two complete games and a 0.54 ERA.