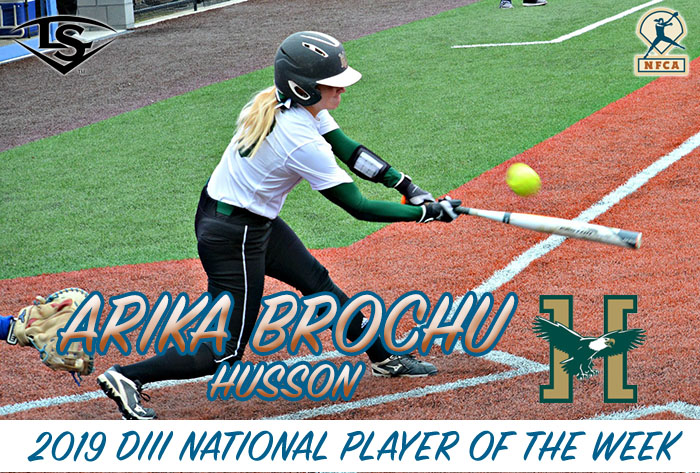 Sophomore Bolduk pitched four straight shutouts, including three one-hitters and a two-hitter — all in Little East Conference tournament play — as the Warriors won their fifth title in 10 years and secured their 21st NCAA berth in school history.  For the four games, the Vernon, Conn., native allowed three walks and struck out 22. Bolduk also helped herself at the plate, with a homer and three runs batted in in the title game against UMass-Boston.

Central (Iowa) senior right fielder Sadie Baugher drove in all three runs in the title game against Coe, as the Dutch won their first conference tournament since 2015. For the week, she batted .800 with a double, two steals and five RBI. …  Calvin junior first baseman Abi Colon hit .455 with two runs, two homers and seven RBI, while playing flawless defense (13 putouts, one assist). … Husson senior catcher Kylie Cunningham caught a teammate’s perfect game and hit .294 with five runs scored. … Central (Iowa) senior pitcher Mariah Fritz threw more than 200 pitches in a pair of complete games on Saturday to lead the Dutch to a conference title. She shutout Coe in the championship game after beating Dubuque earlier in the day. … Husson junior pitcher Jen Jones pitched a perfect game in the tournament championship, and struck out 24 over 22 innings for the week, while walking only one, en route to four wins. She also batted .529 at the plate. … East Texas Baptist freshman pitcher Beatriz Lara tossed a no-hitter and struck out 11 in a tournament victory over Hardin-Simmons, before retiring the side four times in a 2-1 win in the conference title contest against Mary Hardin-Baylor. … Calvin sophomore catcher Grace Stock had two doubles in the conference final to set the school record for doubles in a season (16) and extended her reached-base streak to 20 games. For the week, she hit .444 with four runs and three doubles, and became the first person to throw out Hope speedster Noelle Jackson stealing all season. … Husson senior outfielder Olivia Smith drove in the winning run in the conference title game, and hit .429 overall for the week with four runs, four walks, two homers, and 10 RBI.