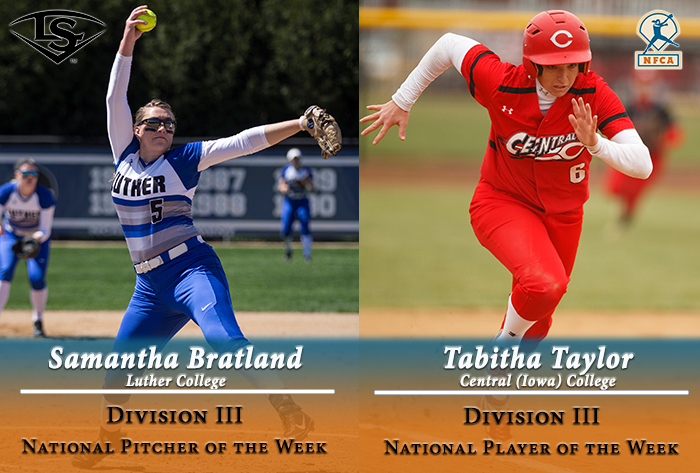 Sophomore right-hander Bratland picked up two wins as the third-ranked (39-3) Norse captured their second-straight Iowa Intercollegiate Athletic Conference (IIAC) Tournament title. She fanned 12 and allowed just an unearned run and three hits in a 5-1 victory over Wartburg in the semifinals, then pitched the final two innings of a 4-3 nine-inning win over No. 9-ranked Central in the championship. For the two games, the Spring Grove, Minn., product allowed six hits and one earned run while walking two and striking out 12 over nine innings.

Junior left fielder Taylor, meanwhile, hit .545 (6-for-11) for four games last week, with two runs, a double, three walks and two runs batted in. The Grimes, Iowa, native reached base seven times in Central’s two IIAC Tournament games and compiled a .636 slugging average and a .643 on-base percentage for the four contests. She also was perfect on defense, with three putouts.

Central senior pitcher Karly Olson had shutout victories in her two starts last week, beating Dubuque and Loras. She walked three, but two were intentional, and she allowed eight hits over 13 innings while fanning 15 opposing batters. On offense, the Winterset, Iowa, native had two hits in the IIAC Championship game, including a two-out double to put the Dutch up 3-2 in the ninth inning against eventual winner Luther, and reached base in three of Central’s four contests.

This is the final Louisville Slugger/NFCA Division III National Player and Pitcher of the Week for the 2017 season. Honorees are selected by the NFCA Division III Top 25 Committee, which has a representative for each of the eight NCAA regions.