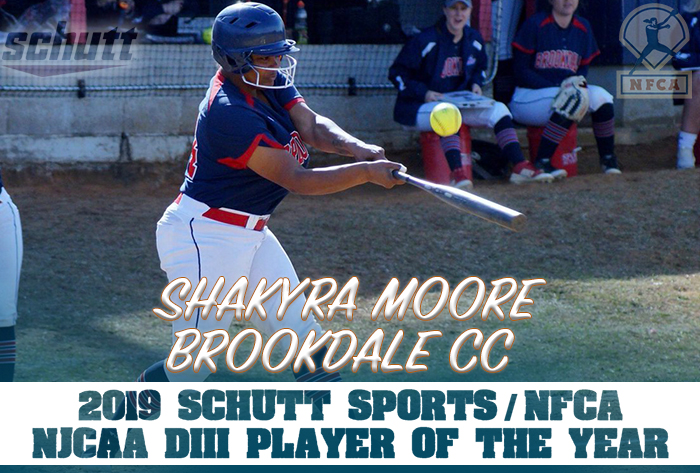 LOUISVILLE, Ky. — The NFCA is pleased to announce that Brookdale Community College freshman third baseman Shakyra Moore has been chosen as the 2019 Schutt Sports/NFCA NJCAA Division III National Player of the Year.

Moore was a force at the plate this season for the Jersey Blues, earning NFCA All-America honors in her first collegiate season, and leading NJCAA Division III in home runs (25) and total bases (169).

For the season, Moore hit .439 with 75 hits, 14 walks, and just seven strikeouts in 189 plate appearances, to help Brookdale go 45-11 and reach the NJCAA Division III championship in May at the McQuillan Complex in Rochester, Minn. The Jersey Blues’ only losses at that event were to six-time champion Rock Valley in the semifinals and eventual runner-up Herkimer on the first day.

The Schutt Sports/NFCA NJCAA Division III National Player of the Year recipient is selected by the NFCA’s NJCAA Division III All-American Committee, which chooses one of its All-Americans for this honor. This was the first year that the award was split to honor players in each of the Association’s five two-year college divisions.