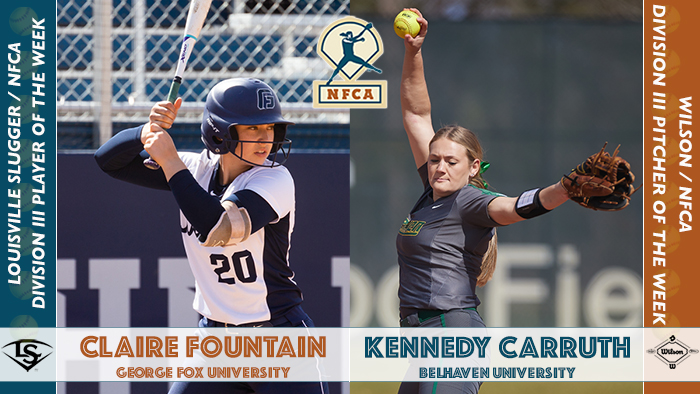 Carruth, a sophomore right-hander from St. Francisville, La., earned her second national Pitcher of the Week honor this season, after limiting then-No. 4 East Texas Baptist to two bunt singles in the first game and just four hits in a second victory. The Coastal Alabama South Community College product fanned eight Tigers over the two complete games and allowed just two earned runs over 14 innings in the circle for the No. 6 Blazers.

Fountain, meanwhile, continued to power her George Fox squad, adding six homers to her Division III-best 16 for the season, and broke the Bruins’ single-season records for home runs and runs batted in (48). She was 3-for-3 with three homers and six RBI in Sunday’s win over Whitworth, and batted .615 for four games, with 12 RBI, two walks, a .667 on-base percentage, a 2.000 slugging average and a 2.667 OPS.