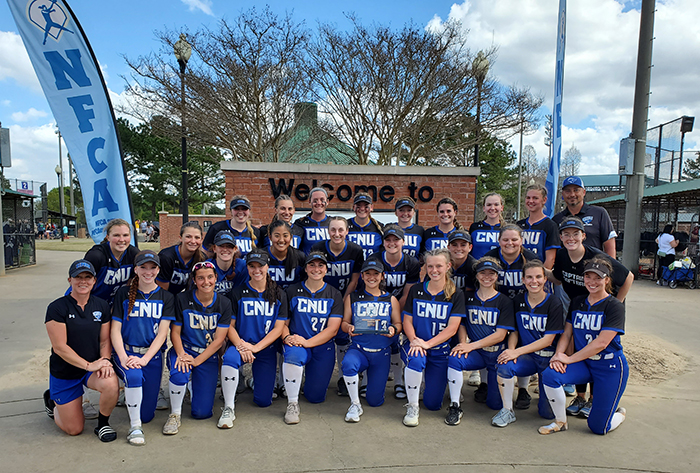 COLUMBUS, Ga. – Christopher Newport was crowned the champion of the 2022 NFCA Division III Leadoff Classic on Sunday afternoon at the South Commons Softball Complex. The Captains, along with Belhaven finished as the only 6-0 teams over the three-day tournament. CNU earned the title as its run differential was a whopping 24 more than the runner-up Blazers.

The Captains (9-0) continued to roll offensively, cruising to 11-0 and 8-1 wins over Claremont-Mudd-Scripps and Pomona-Pitzer. CNU outscored its competition 62-12, posted three shutouts and earned three run-rule victories.

Linfield, which entered Sunday 4-0, split the day and finished with a 5-1 mark. Joining the Wildcats at 5-1 were Texas Lutheran, Randolph-Macon and Virginia Wesleyan. Linfield topped Salisbury 9-4 before dropping a 1-0 contest to Transylvania.

East Texas Baptist rebounded from a 0-2 start to win its final four games of the tournament. The Tigers walked off against Coe, 6-5, and ran past Alma, 10-3. Delanie Loya was the seventh-inning hero with a game-winning single, just minutes after Coe’s Shaylee Dodd tied the game with a three-run homer in the top half of the frame.

In addition to ETBU, RMC, VWU, TLU and DePauw enjoyed a 2-0 outings on the final day of the tournament. The Yellow Jackets received outstanding pitching on the final day, blanking MIT, 3-0, and rallying in the bottom of the seventh for a 2-1 win over Trine. The Marlins earned a pair of one-run victories, holding off a late Central rally for a 5-4 win and topping MIT, 1-0, behind a combined two-hit shutout.

Texas Lutheran scored six runs in the third and five more in the fourth, and registered a total of 11 hits in a 12-1 thumping of Emory, before receiving a two-hit shutout from Amanda White against Manhattanville. Behind two Cami Arnold complete-game efforts, DePauw finished out the tournament 3-3 with 2-1 and 3-1 wins over Piedmont and Berry, respectively