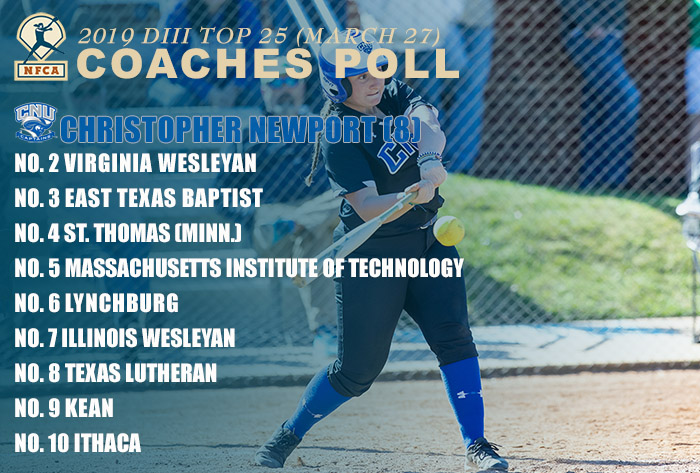 The (16-2) Captains end a streak of 25 straight weeks at No. 1 for Virginia Wesleyan (19-2), who lost twice -- both to ranked teams -- in a 4-2 week. Before being two-hit by two-time reigning Schutt Sports/NFCA Division III National Player of the Year Hanna Hull in Sunday’s opener, Christopher Newport had won 15 straight games. The Captains rebounded to edge the Marlins, 2-1 in eight innings, in the nightcap.

Virginia Wesleyan, which split with then-No. 24 Randolph-Macon earlier in the week, meanwhile, drops to No. 2 in the rankings. The Marlins are still 82-5 over their last 87 games.

East Texas Baptist (24-1) continued its roll, moving up three places this week to third, ahead of St. Thomas (10-2), which lost twice in a 4-2 week, followed by Massachusetts Institute of Technology (6-2) in fifth and Lynchburg (22-4) in sixth. Illinois Wesleyan (10-3), last year’s national runner-up, slid three spots to No. 7 after a three-loss week.