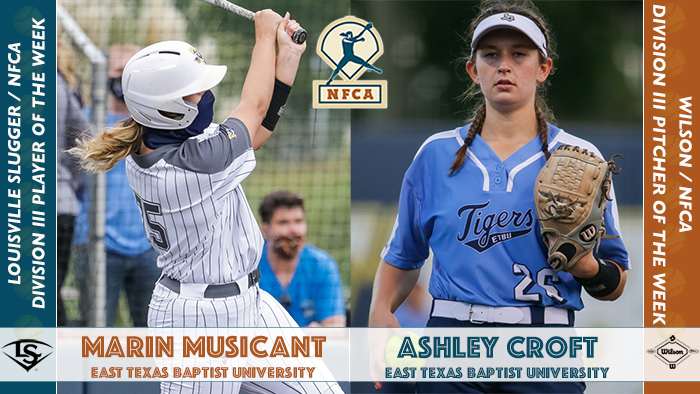 Croft, a freshman right-hander from Cypress, Texas, earned Wilson/NFCA Pitcher of the Week recognition after going 2-0 with two shutouts, 13 strikeouts and three hits allowed over 9.2 innings. The Cypress High graduate followed up a two-hit, 10-strikeout performance against Centenary (La.) with a five-inning, one-hitter against Mary Hardin-Baylor.

Designated player Musicant, meanwhile, batted .800 (8-for-10) with a double, four homers, eight walks, eight runs scored and 10 runs batted in across four games to claim Louisville Slugger/NFCA Player of the Week. The junior from San Diego, Calif., had all four homers against Mary Hardin-Baylor, hitting .778 (7-of-9) with nine RBI in East Texas Baptist’s three-game sweep of the Cru.