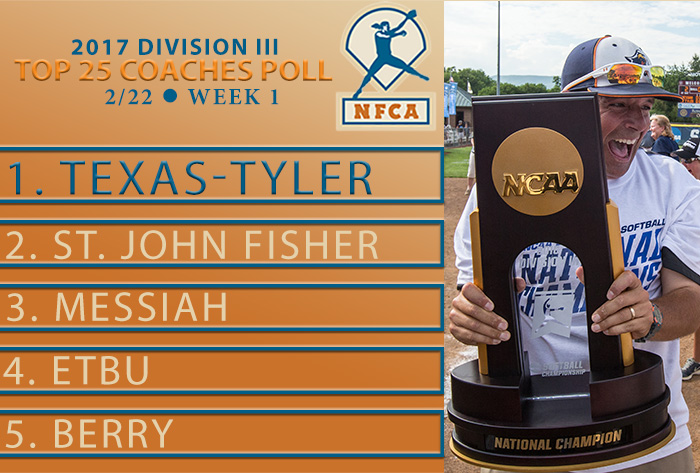 The (10-0) Patriots wasted no time getting off to a strong start, despite losing 2016 Schutt Sports/NFCA Division III National Player of the Year Kelsie Batten and the left side of their infield, going 3-0 last week. And Texas-Tyler is already 2-0 this week after a sweep of Trinity on Tuesday.

The top three remains unchanged, with St. John Fisher (0-0) at No. 2 and national runner-up Messiah (0-0) at No. 3. Messiah opens Thursday at Methodist, while Fisher doesn’t open until March 5.

Elsewhere, surging Texas-Dallas (10-1) moved into the poll at No. 18, while No. 19 Virginia Wesleyan (4-0) picked up six places this week on its preseason poll position. Emory (5-3) and Texas Lutheran (4-4) tumbled seven and 17 places this week, respectively, after slower than expected starts against top competition.