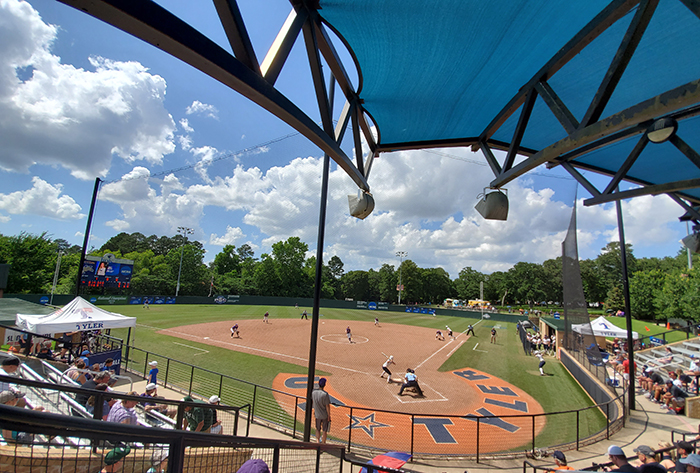 In Sunday’s other semifinal, No. 7 seed Trine faces fourth-seeded Texas Lutheran at 1 p.m. The Thunder eliminated Williams, 10-7, in Saturday’s first game, and will also need to win twice to earn a spot in the finals.

Eastern (36-12) had upset top seed St. Thomas in the double-elimination event’s opening game on Thursday. Saturday’s victory was the second loss of the tournament for the No. 2-seeded Titans.

Meanwhile, Bolduk reverted to her usual elite form after a rare off game in the circle during Friday’s 7-6 loss to Texas Lutheran. She limited Illinois Wesleyan (39-10) to just four hits while striking out four in a complete-game shutout.

Meanwhile, Brea Walker threw 56 of 79 pitches for strikes, and struck out six over 6.1 innings in the loss for the Titans. Sam Berghoff, Brittany Murphy, Hayley Earl and Julie Josten accounted for the four hits for Illinois Wesleyan.

Makaela Hartline homered twice for the Thunder, who built an 8-0 lead before the Ephs made a furious comeback over the final three innings.

Hartline helped fuel a four-run third with a three-run homer to left, then hit a two-run blast in the top of the seventh. Her sixth RBI came when she was hit by a pitch with the bases loaded in the second.

Ashley Swartout also homered, while Victoria Porter had three hits in the win for Trine (37-7).

The Thunder were up 8-0 after four innings, and poised to eliminate Williams (39-7) due to the run rule. But the Ephs had other ideas, scoring one run in the fifth to keep the game going, then four more in the sixth, and two in the bottom of the seventh, before Trine finally closed the door.

Jessica Kim’s double got Williams on the scoreboard in the fifth, and Kirstin Mape led off the sixth with a homer to help the Ephs draw even closer. Dacia Green drove in another run with a single, and Kristina Alvarado’s bases-loaded walk forced in another run, before Mara Kipnis flied out to center to score another run.

Hartline’s second homer provided Trine with a little more breathing room heading into the final half inning, which got interesting when pinch hitter Casey Pelz hit a two-run homer over the center field wall for Williams.