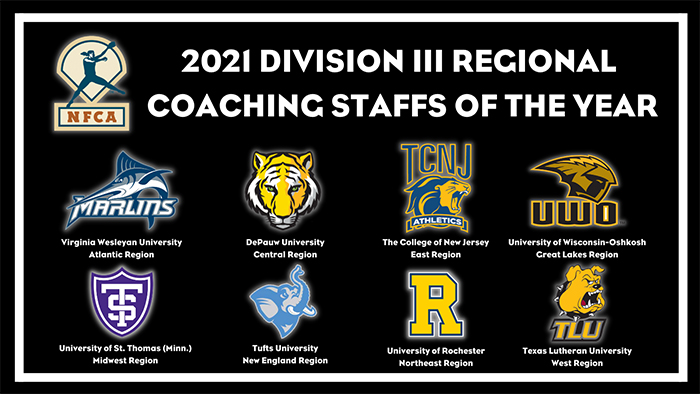 LOUISVILLE, Ky. — Seven of the eight teams that advanced to the NCAA Division III Championship in Salem, Va., were voted by coaches in their respective regions as NFCA Regional Coaching Staff of the Year honorees for the 2021 season.

National champion Virginia Wesleyan led the way, winning the Atlantic Region title for the fourth time in the last five years that awards have been presented. DePauw was the winner in the Central Region, while The College of New Jersey was the pick in the East, Wisconsin-Oshkosh prevailed in the Great Lakes, St. Thomas won in the Midwest, Tufts earned recognition in New England, Rochester was chosen in the Northeast, and Texas Lutheran represented the West.

Erica Hanrahan and assistants Gabby Smart, Haleigh Chasteen and Bob England led DePauw went to a 40-5 record and spent time ranked No. 1 in the NFCA Top 25 before tying for third at the NCAA Championship finals. It is the Tigers’ first Regional Coaching Staff of the Year honor since 2015.

Head coach Sally Miller and assistants Gina Massaro and Jen Richard guided The College of New Jersey to a  26-5 season, the New Jersey Athletic Conference tournament title, and took eventual national champion Virginia Wesleyan to extra innings in one game and had a one-run loss in the final game of the NCAA Virginia Beach Regional against the Marlins.

Head coach Scott Beyer and assistants Alyssa Doomis and Kaitlyn Krol propelled Wisconsin-Oshkosh to a 29-13 mark, which included winning 12 of their final 16 games. The Titans won their conference crown and then NCAA Eau Claire (Wis.) Regional to advance to Salem.

Tufts head coach Lauren Ebstein and assistant Marly Becker navigated perhaps the most challenging season among the honorees, eventually getting to 28 games and a 21-7 record, which included the Jumbos’ return to the NCAA’s final eight for the first time since winning their third-straight national championship in 2015.

NFCA Regional Coaching Staffs of the Year are elected by Division III member head coaches in each respective region. No awards were given in 2020 following the cancellation of the season due COVID-19 pandemic.

Ballots for NFCA Division III National Coaching Staff of the Year are open through 9 p.m. ET on June 11. The winner will be announced online at NFCA.org and on social media on June 14.