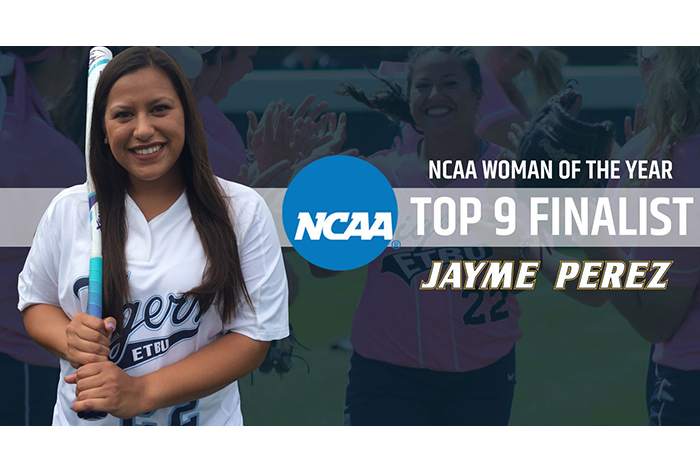 MARSHALL, Texas – For the second time in four years East Texas Baptist University has a NCAA Woman of the Year Top 9 finalist as Jayme Perez

is one of the elite players selected for the award by the NCAA. Perez is one of nine females selected out of over 500 original applications in all of NCAA and 197 in Division III.

In 2014, former ETBU softball player Lya Swaner was selected as a Top 9 finalist. ETBU is the only ASC member to have any player selected for the Top 9.

"Jayme was a model student-athlete at ETBU, who was a leader among her peers on the Tiger Softball team and on-campus.  Her leadership, faith, work ethic, and commitment to excellence is why she is a top 9 finalist. This is a tremendous honor for her and we could not be more pleased to have her representing East Texas Baptist University," Vice President for Athletics Ryan Erwin

As a top 9 finalist, Perez will now travel to Indianapolis, Ind., for the ceremony on Sunday, October 22. The NCAA will announce the winner at the ceremony. With nine student-athletes, the NCAA selects three from each division for the ceremony.

Perez was originally selected by vote of the American Southwest Conference Senior Woman Administrators to represent the conference. She was then picked by an NCAA committee to be a Top 30 nominee. From that point, the committee then selected their top 9. In its 27th year, the NCAA Woman of the Year award honors graduating female college athletes who have exhausted their eligibility and have distinguished themselves in academics, athletics, service and leadership throughout their collegiate careers.

"This is a bit overwhelming for me when I think about it but truly an honor to be a top 9 finalist," says Perez, "I am so excited to represent ETBU and NCAA Division III at the ceremony. I am looking forward to going back to Indianapolis for that weekend and being a part of all the NCAA festivities.  I am so grateful that I can share this with my parents and coach Shirley who will also be there with me."

Having a Hall of Fame worthy career at ETBU, Perez is the only softball player to be a four-time NFCA All-American and be a first-team All-American both academically and on the field. In academics, she has received several awards at ETBU. Earlier this spring, she was the recipient of an NCAA Ethnic Minority Graduate Scholarship along with being selected to go to the NCAA Career in Sports Forum. She also became the softball program's first-ever CoSIDA Academic All-American first-team selection. She received her undergraduate degree in mass communications from ETBU and is currently seeking a master's degree in business administration.

"We couldn't be more excited that Jayme has been selected as one of Top 9 Finalist for NCAA Woman of the year. Jayme truly exemplified a servant-leader and a student athlete in her time here at East Texas Baptist University. She was such a dynamic piece of our program and truly impacted our university, not just by her athletic ability, but through the lives she touched on this campus outside of softball. Jayme had such a heart for service and her dedication to serving, along with her desire to excel both academically and athletically were very impressive. She is a true example of what we hope all of our young female student athletes will strive to be. Dedicated students, who desire to serve others and be successful in every aspect of their life, said head softball coach Janae Shirley

On the field, Perez awards were numerous. She is only the second ASC player to be a four-time NFCA All-American and was a first-team selection in 2017 as a utility player. She was named a four-time All-ASC and NFCA All-West Region first-team selection. Perez led ETBU and the American Southwest Conference with 15 homeruns this past season and also drove in a school record 62 RBI.

In four years, she guided ETBU to four appearances in the NCAA Division III regional tournament, one ASC Championship, two NCAA regional championships, one Super Regional Championship, and one appearance in the World Series. ETBU won 153 games in that time and set a program record for wins in a season at 45 in 2013.

A member of the ETBU Student-Athlete Advisory Committee, Perez served terms as president and vice president of the organization, directing various community service initiatives for SAAC and her team. Perez was a member of the ETBU Student Foundation, Tiger Camp planning committee, and served as a physical education volunteer teaching assistant at Trinity Episcopal School in Marshall. During her collegiate career, Perez was recipient of the University's Joe and Marilyn Hogue Presidential Servant Leadership and President's Christian Scholar-Athlete awards, given in recognition of academic achievement and commitment to service. She also served with her team in December 2016 in Costa Rica on the Tiger Athletic Mission Experience.

The NCAA will announce the winner on October 22 in a ceremony in Indianapolis, Ind.