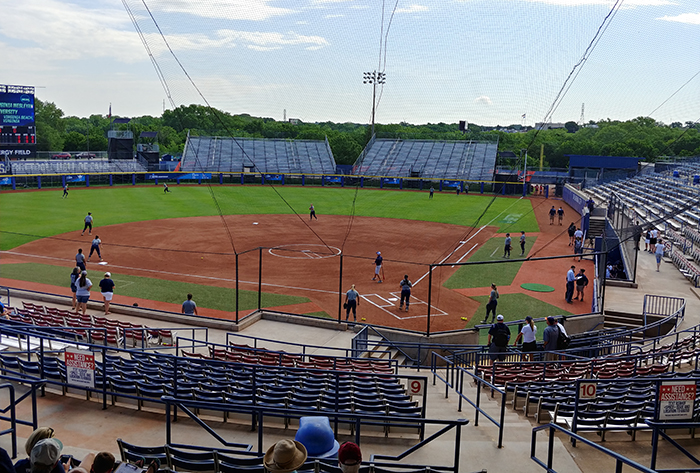 OKLAHOMA CITY — There will be a winner-take-all game at OGE Energy Field to determine the 2018 NCAA Division III national champion, after defending titlist Virginia Wesleyan and Illinois Wesleyan split the first two games of the best-of-three championship series on Monday at the USA Softball Hall of Fame Complex.

Sixth seed Illinois Wesleyan dealt the top-seeded Marlins their first loss in Oklahoma City, 5-4 in eight innings in game two, to force a decisive third game Tuesday at noon ET after the Marlins had won the series opener, 6-1.

Shelby Fulk delivered an one-out triple, and scored what proved to be the winning run for the (40-13-1) Titans in the top of the eighth when Maggie Graham followed with a double. Then, winning pitcher Brea Walker retired the (54-3) Marlins in order in the bottom half to force a decisive third game.

With one out, Madison Glaubke singled, and three-time NFCA All-American Cassetty Howerin doubled. Kate Biando brought in Glaubke with a sacrifice fly, and then, down to her last strike, Teresa Cardamone singled down the right field line to plate Howerin.

Illinois Wesleyan carried a 2-0 advantage into the sixth, when an overturned out call at home and an obstruction ruling on consecutive plays doubled its lead. On appeal, the umpires ruled All-American Sam Berghoff was not tagged by Jessica Lindsay after a strong throw by right fielder Maria Weddle following Julie Josten’s fly out to right. Then, Lindsay was ruled in Fulk’s path to home, allowing the second run of the inning to score.

In the third, Berghoff singled home Jillian Runyon (single, steal) and Sydney Alery (walk) also scored on the play on a fielding error.

Walker pitched all eight innings in the second game for Illinois Wesleyan after coming on in relief of All-American Ally Wiegand in the first contest.

Meanwhile, two-time All-American Hanna Hull fanned 18 Titan batters in the two games, to give her 55 over 31 innings and five starts at the championship. Carla Hall pitched the final two innings Monday after Hull had tossed Virginia Wesleyan’s first 33 innings in the circle in Oklahoma City.

In the first game, Glaubke and Julia Sinnett homered to propel the Marlins to victory.

Glaubke hit a solo shot in the first, while Sinnett connected on a two-run homer in the fourth. Howerin and Biando singled in Virginia Wesleyan’s two runs in the fifth, and Howerin also drove in her team’s final run with a single in the top of the seventh.

When they tied the game at 1-1 on Berghoff’s RBI single in the bottom of the first, the Titans snapped Virginia Wesleyan’s 21-inning scoreless streak at the tournament.