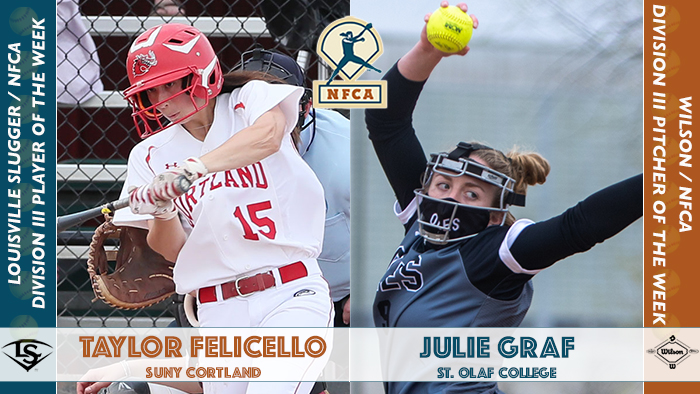 Felicello, a senior shortstop from Marlboro, N.Y., hit .833 (10-for-12) with eight runs, two doubles, a triple, three walks and six runs batted in for the week. The Marlboro High product was 6-for-8 with a double, triple and three RBI in a sweep at Potsdam, and 4-for-4 with a double, three runs scored and three RBI in a home sweep of Buffalo State. She also was flawless in the field, handling nine chances without an error, including assisting on the final two outs of a no-hitter.

Graf, meanwhile, earned her second national Pitcher of the Week honor this season for the No. 19 Oles, after tossing two no-hitters in four starts — all wins. She fanned 13 in a five-inning no-hitter against Gustavus Adolphus last Monday, then struck out 12 over seven innings in a no-hitter against St. Catherine on Saturday. The Eastlake High product is now one whiff from joining the Division III top 10 in career strikeouts, and has not allowed an earned run over her last 35.1 innings.