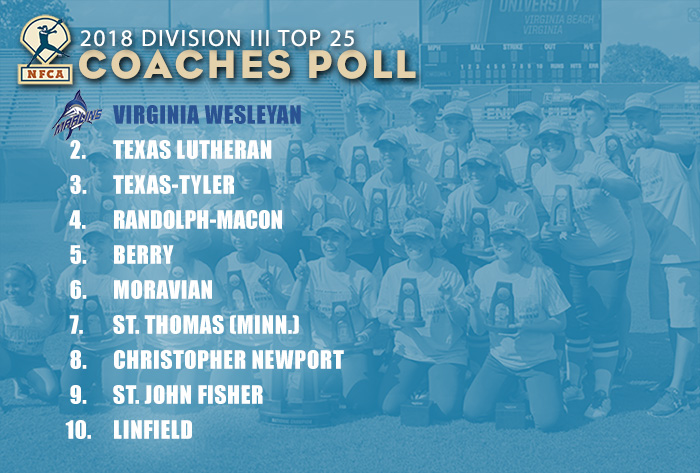 LOUISVILLE, Ky. — The first six teams remain the same this week in the NFCA Division III Top 25 rankings, which continues to be led by the trio of defending national champion Virginia Wesleyan, No. 2 Texas Lutheran and No 3 Texas-Tyler.

The top-ranked (39-1) Marlins suffered their first loss since last May — an unbeaten span of 41 games — in the second game of last Wednesday’s doubleheader against No. 4 Randolph-Macon, before rebounding to win four straight to close out the regular season and remain the unanimous No. 1 team for a 17th straight week. Virginia Wesleyan is the top seed and two-time defending champion for the Old Dominion Athletic Conference (ODAC) tournament, and will open play noon Friday against eighth-seeded Guilford, which it swept in two five-inning games on April 8 by a combined score of 19-1.

Randolph-Macon (37-3), meanwhile, is the second seed for the ODAC tournament, and will face seventh-seeded Randolph on Friday. Lynchburg (28-10), which is the top vote-getter this week among those not in the Top 25, is the No. 3 ODAC seed and will play sixth-seeded Eastern Mennonite Friday.

No. 5 Berry (36-4) and No. 6 Moravian (26-4) were the other two unchanged teams in the first six. Berry is awaiting the NCAA tournament after capturing its fourth straight Southern Athletic Association championship last week, while Moravian is still wrapping up its regular season.

Tufts (23-7) is the newcomer this week, after sweeping both previously-ranked Babson and then-No. 12 Amherst as part of a 5-0 week. Massachusetts Institute of Technology (29-5-1) and College of New Jersey (26-6) joined the Top 25 at No. 19 and 25, respectively, after both received votes last week.