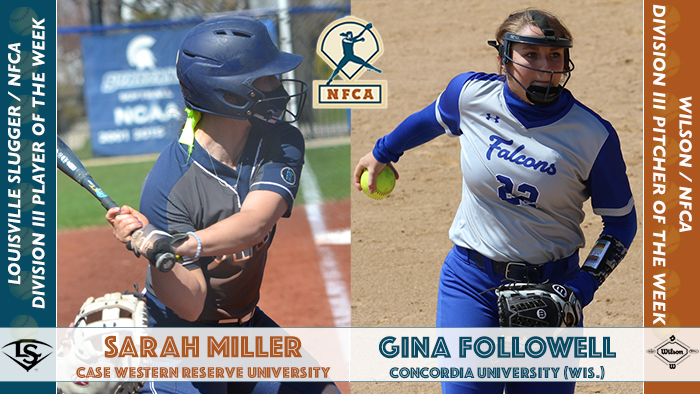 Followell, a junior right-hander from Romeoville, Ill., threw three no-hitters and a perfect game in a remarkable week. Over those 21 innings, the Plainfield East High product fanned 56 batters and walked only one, collecting two wins apiece against Marian and Alverno.

She struck out at least 12 in every game, and collected 18 last Tuesday in the first of her two victories over Marian. Followell notched 12 more on Saturday, then had 14 on Saturday and 12 on Sunday against Alverno.

Miller, meanwhile, hit five home runs in three games, batting .615, slugging 1.769 and driving in nine. The senior shortstop from Lorain, Ohio, had three of her homers in a 5-4, 11-inning loss at Division I Kent State on Sunday, going 3-for-5 with four runs batted in. Miller’s three homers tied a single-game school record accomplished twice in 2015 by two-time NFCA All-American Annie Wennerberg.