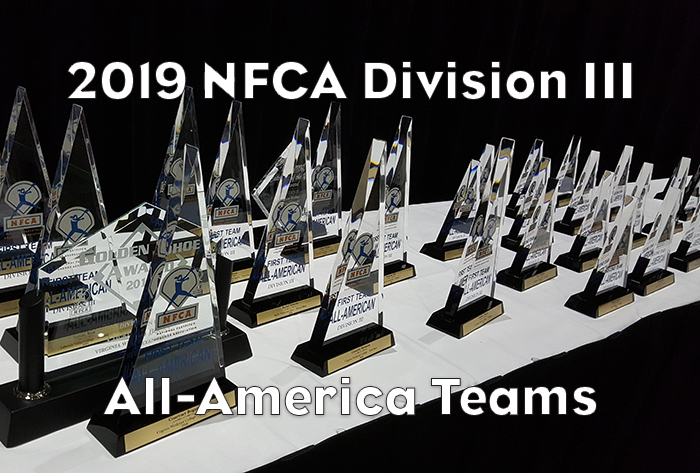 TYLER, Texas — The NFCA is proud to announce the 45 players chosen for the 2019 NFCA Division III All-America softball teams.

The honorees were recognized on Wednesday during the NCAA Division III Championship banquet at the Herrington Patriot Center on the University of Texas at Tyler campus.

The host Patriots led the way with three All-America honorees, while nine other schools had two recipients each. The remaining 20 teams had one representative apiece.

In all, 31 Division III schools are represented on the three All-America squads. Five of the eight teams that advanced to the NCAA Division III Championship have All-Americans on their roster.

First-team pitcher Hanna Hull has been one of the most dominant pitchers in Division III again this season for Virginia Wesleyan University. She finished her year at 29-4, with a 0.55 ERA, 20 complete games, 11 shutouts and four saves. She allowed just 84 hits, 15 earned runs and 49 walks, while striking out a Division III-best 339 over 190.1 innings.

University of Lynchburg first baseman Mackenzie Chitwood capped her career with a powerful season, hitting .382 with a Division III-leading 21 homers and 72 RBI. In all, she collected 34 extra-base hits and scored 47 runs in 52 games to earn first-team honors.

Versatile Thomas More University senior Alix DeDreu has the most doubles (26) and second-most hits (77) in the country, while playing a mix of pitcher, second base and shortstop. For the season, she hit .490 while striking out just three times in 157 at-bats, to earn the first-team second base nod.

Nicole Garcia again earned one of the outfield spots, hitting .485 with 55 runs, 64 hits, and 29 RBI for Texas-Tyler.

Junior pitcher Kierstin Anderson-Glass heads into the NCAA Division III championship finals this week with a 26-3 record and 0.66 ERA, while recording 15 shutouts and 121 strikeouts over 179 innings to nab an at-large position.

Fellow junior Stefanie Guercio, of Carthage College, finished her season with a 21-4 mark and 0.80 ERA, walking just 38 and fanning 229 over 158.1 innings to grab another at-large spot, while Worcester Polytechnic Institute’s Caraline Wood rounded out the at-large selections — and the first team — by posting a .465 average, 42 runs and 67 hits (including 30 extra-base hits) this year.

In addition to being selected as a second team All-American outfielder, Kelly Jurden of Texas Lutheran University was also chosen as this year’s recipient of the New Balance/NFCA Golden Shoe award for her basestealing prowess.