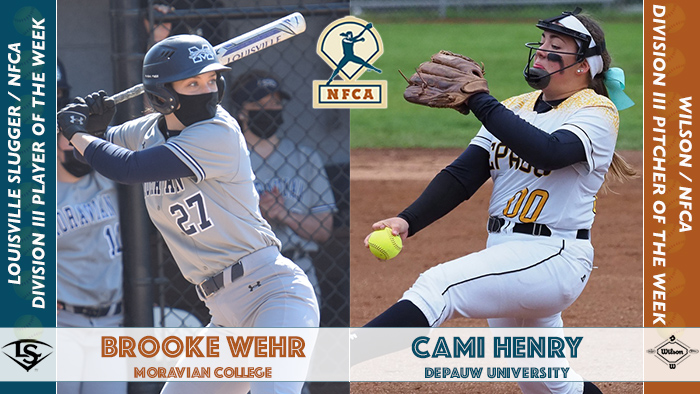 Henry, a junior right-hander from Camby, Ind., went 2-0 against nationally-ranked Trine last week for the (14-1) Tigers, who themselves are the No. 7 team in Division III. She pitched a three-hit shutout in the first game against the then-No. 22 Thunder, with a school-record 14 strikeouts in the 1-0 triumph. The Mooresville High product then allowed one unearned run over four innings of relief in the second game, with two hits, no walks and four strikeouts.

Wehr, a senior catcher from Orefield, Pa., powered No. 16 Moravian’s 6-0 week with a .579 average (11-for-19), seven runs, four doubles, two triples, two homers and 14 runs batted in. Then on Sunday, in the final game of a four-game sweep of Juniata, the Northwestern Lehigh High graduate became the fifth player in school history to have three doubles in a game. She also played flawlessly all week on defense.