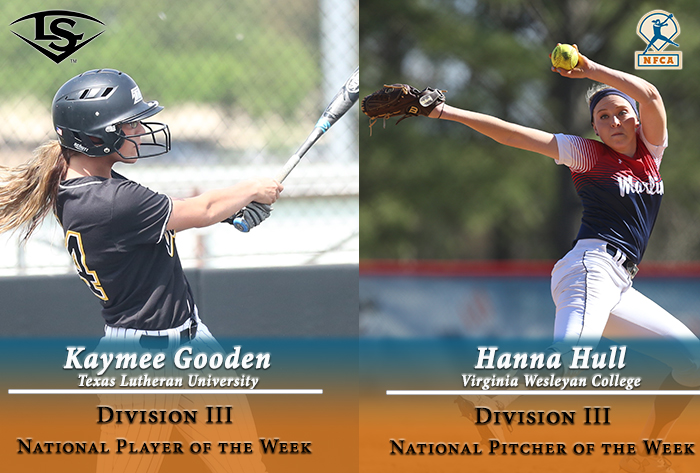 For Hull, it is the freshman lefty’s third honor of the season, following a week in which she went 2-0 with a save, no earned runs, just six hits and three walks allowed, while striking out 33 over 16 innings in the circle for the top-ranked (35-1) Marlins. The Clover Hill High graduate also provided the two RBI, walk-off single in the bottom of the seventh to give Virginia Wesleyan a come-from-behind 3-2 win over Roanoke in the first game of a doubleheader sweep on Saturday.

Previously, Hull was the Pitcher of the Week on March 1 and 8 this season.

The McLennan College transfer hit two, two-run homers in a 12-1 rout of the University of Dallas and had an RBI in each of Texas Lutheran’s four games last week.

Wisconsin-Oshkosh junior third baseman Erika Berry hit safely in all six games last week, batting .550 (11-for-20) with two doubles, two homers and six RBI. … Concordia (Wis.) junior pitcher Emily Brekke went 2-1 with two saves, one earned run (two runs allowed total) and 30 strikeouts over 26.2 innings. She allowed the earned run in a 2-1, 12-inning loss to Dominican and finished her week with 15 scoreless innings. … Webster freshman infielder Abby Burroughs was 11-for-22 (.500) with eight runs, two doubles, three homers and eight RBI. … Berry senior pitcher Marie Collop collected two wins, including a three-hit shutout over Rhodes in which she fanned 10 and faced just 25 batters. She also had 15 putouts and five assists while playing flawless defense. … Birmingham-Southern sophomore pitcher/utility player Haley Crumpton went 3-0 with three shutouts, allowing just two earned runs, walking none and striking out 23 over 21 innings. Meanwhile, she batted .500 with five runs scored and 12 hits, including four doubles, and six RBI. … Saint Joseph’s (Brooklyn) senior third baseman Kristin Ferrigno batted .545 (6-for-11) with three runs and a homer. … SUNY Canton junior second baseman Kaleigh Foran hit .818 (9-for-11) with seven runs, a double, three walks and three RBI. … Wisconsin-River Falls junior second baseman Amber Galloway went 8-for-17 (.471) with two doubles, four homers and 10 RBI for the week. She had an RBI double and grand slam against Wisconsin-Stevens Point, then two more homers in the nightcap, including a walk-off homer in the eighth. … St. Catherine sophomore third baseman Jenna George hit .476 with seven extra-base hits, including three homers. She had a grand slam in a 12-0 rout of Bethel. … Manhattanville sophomore designated player Aarin Hartenstein went 6-for-10 (.600) with a double, two homers and seven RBI, while also allowing just one runner past second in her lone start of the week in the circle. … Spalding sophomore shortstop Lindsey Hubbard scored hits in 14 straight at-bats (three short of the Division III record), while going 17-for-23 (.739) with seven runs, two doubles and three RBI. … Meredith junior pitcher Taylor Jackson was 2-0 with a 0.49 ERA, two complete games and 14 strikeouts over three appearances. … Moravian senior first baseman Abby Jeffries batted .571 (4-for-7) with a homer, two RBI and 13 putouts during a perfect week in the field. … Moravian junior pitcher Josie Novak had a win and a save, allowing just two hits in a sweep of Susquehanna. … Central senior pitcher utility player Karly Olson was 2-0 with three hits and 13 strikeouts for the week, while also batting .462 with two walks, a double and six RBI. … Linfield junior outfielder Melanie Oord had grand slams in consecutive at-bats during a week in which she batted .545 (12-for-22) and scored seven runs while collecting two doubles, a triple and 13 RBI. … Whitworth senior pitcher Madi Perez dealt Pacific Lutheran its first two shutout losses of the season, collecting two wins and a save over three appearances. She had a two-hitter and a five-hitter, plus 1.2 innings of hitless relief. … Texas Lutheran junior pitcher Maitlin Raycroft continued her dominance, tossing her Division III-record seventh no-hitter of the season against the University of Dallas, facing one over the minimum to just miss being perfect for the second time this year. In her other start, she pitched a two-hit shutout — her Division III-leading 12th shutout of the season — and totaled 18 strikeouts and no walks for the week. … Berry sophomore first baseman Kayla Sangrey hit .500 (4-for-8) with two runs and two doubles. Three of her four RBI came in the fifth inning or later. … Wisconsin-Oshkosh sophomore pitcher Bailey Smaney allowed just one earned run in 17 innings last week, going 2-0 and tossing six scoreless innings against then-No. 9 Wisconsin-Eau Claire. … Central freshman center fielder Sara Tallman was 8-for-13 (.615) with seven runs, three walks and four doubles. She scored five of the Dutch’s six runs in a doubleheader sweep at Simpson.