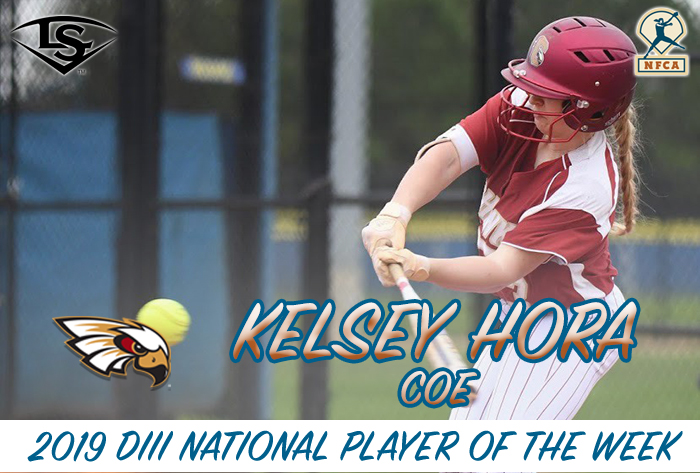 Junior left-hander Hull struck out 18 in a two-hit shutout of Fredonia, and also tossed a five-hit shutout against Kean. For the week, the two-time reigning Schutt Sports/NFCA National Player of the Year totaled 31 strikeouts and walked just two, while limiting opposing batters to seven hits and no runs over 14 innings in the circle.

Northwestern-St. Paul sophomore utility player Megan Aasness was perfect at the plate (6-for-6), on the bases (3-for-3 on steals) and in the field (five putouts, one assist) in a pair of wins. …  Salisbury junior third baseman Kaleigh Edwards hit .615 (8-for-13) with six runs, a double, homer and three RBI. … St. Olaf junior pitcher Julie Graf went 2-1 for the week with two complete games, a 0.38 earned-run average, six hits and 37 strikeouts over four appearances. She tossed an one-hitter against Rockford, fanning 12 and contributing two RBI singles, one of which drove home the go-ahead run. … Rhodes senior shortstop Jill Healy was 8-for-15 (.533) with six runs, a double, three homers and 10 RBI. … Coe senior pitcher Alyssa Olson threw a perfect game against Eastern Mennonite and allowed just one run and two walks over 12 innings for the week, striking out 23. … Ripon senior pitcher Lexi Reetz had two complete-game shutouts, allowing six hits — all singles — and fanning 23 over 14 innings. She had 11 strikeouts in an one-hit shutout of Macalester, and tied a career-high with 12 strikeouts in a five-hit shutout of Rockford. … Berry senior third baseman Katlin Seger had two runs, two doubles, seven RBI and a .714 batting average.