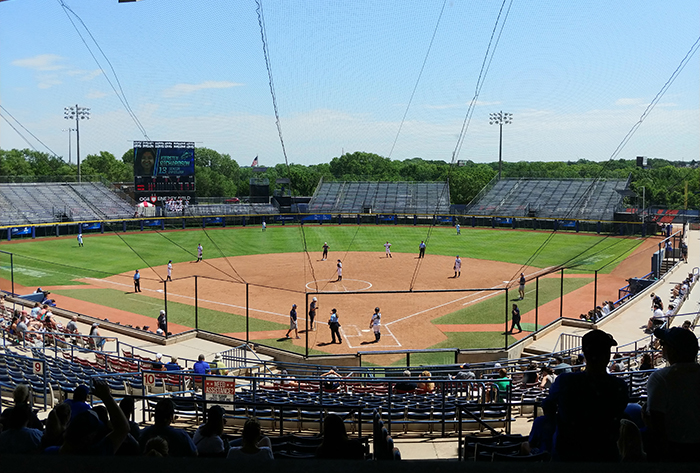 Hull, who was named to her second-straight NFCA Division III All-America team at Wednesday night’s NCAA Championship banquet, recorded seven of her strikeouts in the first four innings, facing just one batter over the minimum during that stretch.

Both teams combined for just one hit through the first four-and-a-half innings, and there were only four hits in the entire game. Virginia Wesleyan (51-2) finally broke through on the scoreboard with three runs in the bottom of the fourth without a hit.

Jessica Lindsay and Julia Stinnett walked on opposite sides of Amy Large’s strikeout, and Maria Weddle reached on an error on a bunt that loaded the bases. Beth Ford then reached on a fielder’s choice that retired Lindsay at home, and Kiersten Richardson was hit by a pitch to plate Stinnett with the first run. Madison Glaubke walked to score Weddle, and Cassetty Howerin walked after a pitching change to score Ford.

The Marlins added three more runs in the fifth in a more conventional fashion — on a pair of hits. With one out, Large walked and Stinnett singled to right. Weddle was hit by a pitch, and Ford grounded out to score Large from third. After Richardson walked, Glaubke singled to center to score Stinnett and Weddle.

Four pitchers — Haley Congdon, Beth Fleming, Shannon Grange and Payton Cutting — combined on the four-hitter in the loss for the (33-12) Bombers.

Two-time All-American Samantha Bratland pitched a two-hitter as the (41-9) Norse opened with a victory.

Luther took the lead in the top of the first on Blake Banowetz’s groundout to short that scored fellow All-American Ashley Burrows, who had walked, moved to second on All-American Anna Strien’s walk and took third on a Bailey Victoria’s fielder’s choice.

The Norse added a run in the second on Natalie Stockman’s two-out double to left center that plated Megan Bonnett, who had singled and moved to second on a wild pitch.

Luther tacked on another three runs in the sixth on a Bonnett double, and consecutive two-out singles by Strien and Victoria.

MIT (38-10-1) went without a hit against Bratland until back-to-back singles by Sierra Rosenzweig and Jasmin Joseph with one out in the sixth.

Devon Goetz followed with a walk to load the bases and Amanda Lee added a walk of her own to score Rosenzweig. A second run came home when Sarah Von Ahn was hit with a pitch, and Madi Pickett’s sacrifice fly scored the Engineers’ third run.

Addy Pender’s homer to left in the top of the seventh accounted for Luther’s final run.

Texas-Tyler scored two runs in the first two innings and All-American Colleen Bentke took it from there, tossing a complete-game two-hitter.

All-American Lynsey Mitchell’s sacrifice fly scored fellow All-American Nicole Garcia (who had singled) in the first, and Victoria Gonzales doubled home Hannah Moore, who had led off with a double in the second for all the runs the Patriots would need.

In the fourth, All-American Andrea Gonzales’ bases-loaded walk plated Texas-Tyler’s third run, and Kailey Henderson’s three-run homer led a four-run fifth, that included an RBI single by Andrea Perez, one day after she was named an All-American and also the winner of both the 2018 Schutt Sports/NFCA Division III National Freshman of the Year and Diamond Sports/NFCA Catcher of the Year awards.

Case Western managed its lone run in the fifth — when it also notched its first hit. Grace Tritchler reached on an error, and pinch runner Caitlin Smith moved to second on Katie Wede’s groundout, before Arisa Cleaveland collected the Spartans’ first hit of the day off Bentke to score Smith.

The Patriots will play in Friday’s 5:30 p.m. ET winner’s bracket game against Illinois Wesleyan, while Case Western Reserve will face Rowan at 2:30 p.m. in Friday’s other elimination contest.

Berghoff singled and then scored on Maggie Graham’s one-out hit in the third, and Graham scored as well on Delaney Olinger’s single to build a 3-0 advantage early.

Jillian Runyon scored Illinois Wesleyan’s first run in the first, when she led off the game with a bunt single, stole second and scored on Shelby Fulk’s single to left center.

Fulk then provided some insurance in the seventh, hitting a two-run homer to left, scoring Berghoff, who led off the inning with a walk.

The (39-12-1) Profs’ lone run off Wiegand came in the bottom of the fourth, when Kelly Duffy hit a solo homer to left.