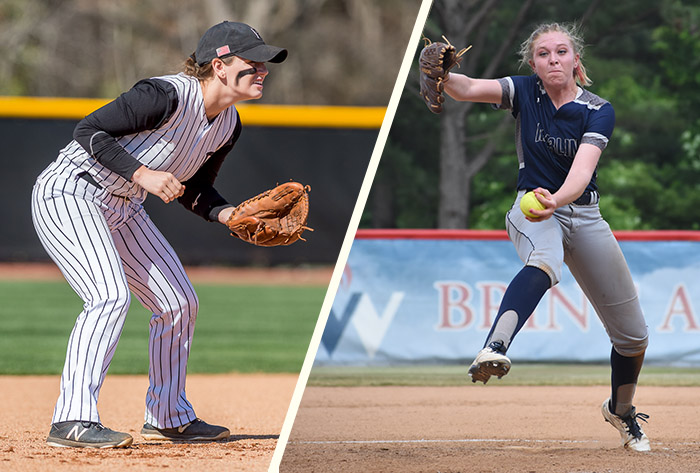 Sophomore left-hander Hull, who earned both Schutt Sports/NFCA Division III Player and Freshman of the Year honors for the national champion Marlins last season, has picked up right where she left off, going 4-0 with a save this past week for top-ranked Virginia Wesleyan (8-0).

The Chesterfield, Va., native pitched her first collegiate perfect game (and second college no-hitter), striking out 14 in an 1-0 win over Salem College. Over 28 innings of work, Hull fanned 52 batters, allowed no earned runs and just eight hits and three walks. She was National Pitcher of the Week three times last season.

Junior shortstop Sherrill, meanwhile, hit .714 (10-for-14) in four games for the (7-1) Falcons. The Hiddenite, N.C., product had a double, eight stolen bases and four runs scored, as she surpassed 100 steals and 120 runs for her Pfeiffer career. She also was solid in the field, with seven putouts and 13 assists.

In eight games this season, the Alexander Central High graduate and 2014 Gatorade North Carolina Player of the Year is hitting .679 with 14 runs scored, 29 total bases, 12 steals and a .710 on-base percentage.