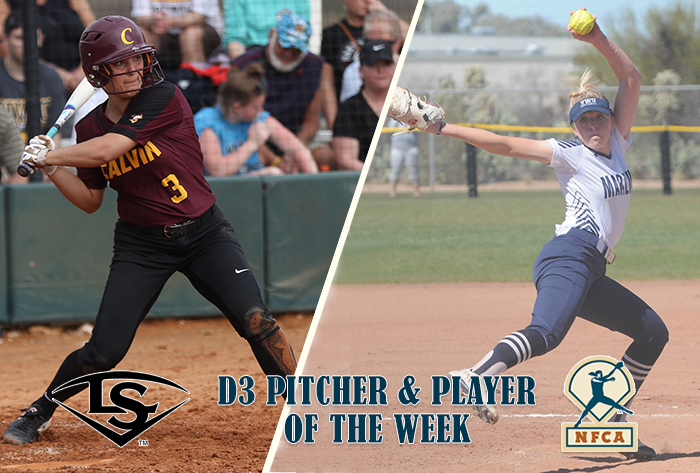 Sophomore left-hander Hull had another terrific week to collect her third weekly honor of the season and sixth of her career. The reigning Schutt Sports/NFCA Division III National Player of the Year went 5-0 with a save over four days and 26.1 innings, allowing just 15 hits, zero earned runs and one walk, while fanning 42 batters. The Clover Hill High graduate is now 17-0 this season for the unbeaten defending national champion (26-0) Marlins, with a 0.53 earned-run average, 166 strikeouts (11.03 per game) and just 21 walks and eight earned runs over 105.1 innings.

Freshman catcher Stock, meanwhile, is riding a six-game hit streak, the last four of which she has hit .909 (10-for-11) with five extra-base hits and 10 runs batted in. The Vicksburg, Mich., native threw out the one runner attempting to steal against her and collected 22 putouts and three assists in a perfect week behind the plate for the (15-2) Knights, who made their debut in the NFCA Top 25 poll earlier today in a tie at No. 20 with Babson.

Berry senior second baseman Kylie Aiken went 5-for-11 (.455) with two runs, two doubles and six RBI, while collecting one putout and seven assists on defense without an error. … East Texas Baptist senior pitcher Jordan Anderson pitched a no-hitter in a 2-0 week in the circle that included a save. She fanned 11 in the no-hitter, then tossed another shutout in the other end of a twinbill. … East Texas Baptist junior third baseman Mackenzie Anderson hit .600 (6-for-10) with two runs, two walks, two triples, two homers and eight RBI. … Thiel senior pitcher Shannon Baker pitched a five-inning no-hitter against La Roche in a 2-0 week that included one earned run in a win over Bethany and a total of 10 strikeouts and six hits over 12 innings of action. … Luther junior pitcher Samantha Bratland collected four wins and a save in a 9-0 week for the Norse. … Meredith senior third baseman Brittany Bucklin batted .529 (9-for-17) with six runs, two doubles, two walks, a homer and seven RBI, while playing flawless defense. … Luther senior center fielder Ashley Burrows collected a hit in each of her team’s nine wins, including tying the Norse career hit record (206) in her final Florida trip at-bat, and added six steals in six attempts. … SUNY Canton junior outfielder Valerie Clark was 6-for-7 (.857) with four runs and seven RBI over a pair of three-hit games. … SUNY New Paltz freshman shortstop Katie Conrad went 7-for-14 (.500) to open conference play, with three doubles. … Randolph-Macon sophomore catcher Sami Davidson collected her third homer of the season and totaled seven RBI, including driving in the tying run to force a 10th inning against Lynchburg. … Linfield senior center fielder Cheyenne Fletcher was 8-for-19 (.421) with nine runs, four walks, three steals, three homers and eight RBI. … Trine senior first baseman Kaylee Fox had six hits — five of which were homers — plus six walks and 11 RBI, becoming the school leader in career RBI (192). She also set a single-game mark with three intentional walks against Olivet, including one with the bases loaded. … Wilkes senior left fielder Christina Gambino had three straight homers and drove in nine runs for the week. … St. Catherine junior third baseman Jenna George hit .571, including going 3-for-3 with a homer and four walks in a doubleheader. … Calvin junior pitcher Anna Gernant tossed a no-hitter in a run-shortened game and now has 72 strikeouts and a 0.98 ERA over 42.2 innings. She also has a five-game hit and RBI streak. … Berry senior pitcher Kassie Howard picked up two more wins, averaging nearly 10 strikeouts per game while fanning 18 and yielding just eight hits over 13 innings. … Grinnell senior third baseman Kayla Morrissey went 12-for-20 (.600) with 11 runs, seven doubles, a triple, three walks and five RBI. Three of the doubles came in the same game. … La Verne senior pitcher Elisa Ponce tossed a complete-game four-hitter to collect her sixth win of the season. … Ripon junior pitcher Lexi Reetz won both ends of a doubleheader sweep of Beloit, delivering her third one-hit shutout of the season and a four-hitter. She also was 4-for-8 at the plate, with two runs and three doubles. … Texas Lutheran sophomore shortstop Cassie Roche hit .727 (8-for-11) with five runs, two doubles, a homer and four RBI. … Westminster (Pa.) senior pitcher Jazmyn Rohrer allowed just one run over 10 innings to notch two victories, including one after three hitless innings of relief. … Linfield junior pitcher Shelby Saylors went 3-0 with three complete games and just three walks in 27 innings. … Babson sophomore pitcher Brooke Stock carried a no-hitter into the seventh at Wellesley and totaled three wins, 14 strikeouts and a 0.74 ERA over 19 innings. … Suffolk freshman pitcher/utility player Payton Sylvester had the most total bases (15) in a single game in Division III since 2007, and is now one of just eight players in history to have at least that many in a contest. For the week, she was 7-for-13 (.538) with seven runs, two doubles, four homers and 13 RBI, while also going 1-1 in the circle. … Thiel sophomore center fielder Leah Woytek was 7-for-14 (.500) with six runs, a double, two triples and seven RBI.